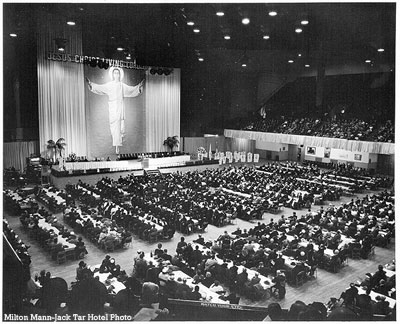 Left leaning commentator Matthew Yglesias, who’s Jewish, tweeted today: “Think I’m becoming a Straussian/Putnamist who instrumentally wants to get everyone to go to church again.” Columnist Ross Douthat, who’s Catholic, responded: “Be the change you seek.” Yglesias retorted: “Not gonna sell out the chosen people like that! But I’m gonna go neocon and root for the Christians vs the post-Christians.”

Although personal religious faith remains strong for many Americans, institutional Christianity is declining, with a minority of Americans now identifying as church members. Many Americans are now religious without church affiliation. And many Americans are still church going without identifying with or even belonging to denominations or congregations. With some exceptions, Protestant denominations and Catholicism are declining, while nondenominational Christianity is growing. Religion is increasingly individualized.

Savvy non-Christian commentators like Yglesias recognize that de-churched America or post-Christian America is not good for democratic, civic-minded America. Americans detached from traditional religious institutions are more susceptible to political extremes, to social isolation, to conspiracy mindsets, to identity politics, to apocalyptic perspectives, to fears and despair that mitigate against good citizenship.

Churches and denominations were central to building America’s democratic ethos. They civilized and socialized the early frontier. They created a wider civil society supporting politics, education, charity and community building. Regular church goers have never been a majority in America. But churches as institutions were foundations and pillars of wider society that benefitted all. Typically savvy non religious people have recognized their centrality to American culture and civic life.

In recent decades a growing secular elite has scoffed at organized religion’s social and political contributions to American life. For many of them, religion, even its progressive variants, is irrelevant, retrograde and reactionary. It merits dismissal and mockery. The decline of religious institutions should be welcomed as human progress, they think, without considering what might replace them. Societies don’t function well without culture-shaping institutions like churches.

Unfortunately, many religionists have not been helpful in response. Traditional Protestant denominations and the Catholic Church, whatever their faults, understood their historic responsibilities to shape and serve wider society. In America they saw themselves as stewards of American democracy. Their decline left a vacuum.

Nondenominational Christianity and evangelicalism often lack this long history and self-understanding as cultural stewards. They often focus more exclusively on individual faith and spiritual needs sometimes from a consumerist perspective. Sometimes their adherents see themselves more as a tribe or a subculture than as parcel to wider society with wider responsibilities.

What critics of civil religion fail to see is that Christianity has a duty to society to help create the language and architecture for constructive civil life that benefits all. Christianity wants all to be fed, clothed, housed, provided health care, treated with dignity, given security, and equipped with the political tools to live harmoniously in peace. Christians seek the common good for all society, not just what directly benefits themselves. But this promotion of the common good certainly benefits Christians and itself witnesses to the power, grandeur and truth of the Gospel.

Conservatives Christians of today want to protect the church from social hostility. Liberal Christians want the church to be a tool for social justice. But American Christianity at its best evangelized, discipled, offered charity to all and helped build and refine American democracy in ways that pointed Zionward and in collaboration with all who shared a vision of the good society.

This comprehensive multifaceted work on behalf of the Gospel and civilization requires strong religious institutions and strong religious memberships. Atomized individuals pursuing their own spiritualities are not particularly helpful to this project. Ardently religious people disconnected from great traditions and multigenerational religious institutions generally will lack the wisdom they need to sustain healthy civic life.

So America needs to be rechurchified. Certainly we need evangelism and converts to genuine faith. But such converts may fail as believers and as citizens if they are not catechized into the wider institutional church. It’s fashionable now even among the religious to mock and disdain organized religion. Supposedly we can all access God without it.

But no branch of Christianity or any traditional monotheistic religion believes God calls His people to absolute autonomy and isolation. Traditional religion always involves a community and institutions. They often fail but no more so than do individuals.

Sustaining religious communities requires compromise, sacrifice, grace, mercy, patience, humility. And all of these qualities are needed for wider society and nation. Hence churches are nurseries and building blocks for decent and sustainable society.

So Matthew Yglesias is wise, as a non-Christian who cares about society and America, to hope more Americans go to church, to the benefit of all. Will more Christians share in this insight?