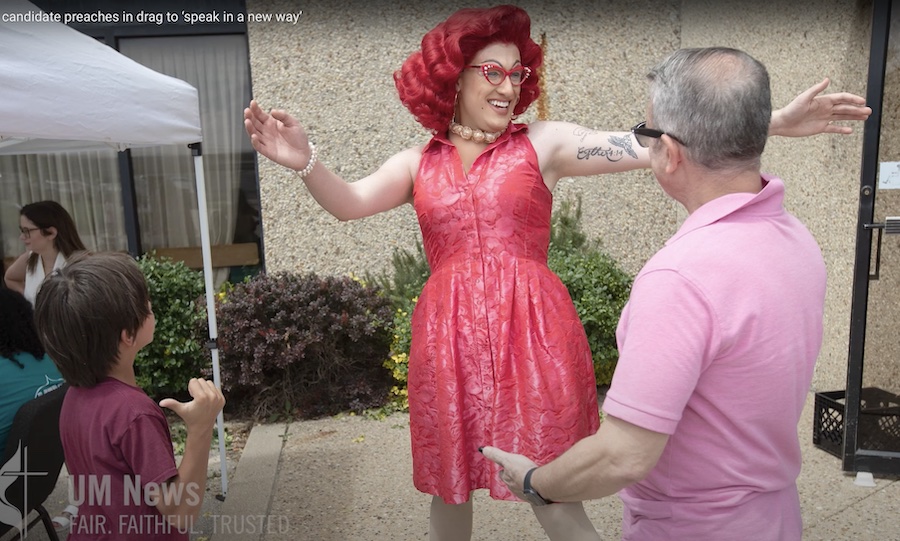 A United Methodist candidate for ordination who performs as a drag queen has been favorably profiled by the denomination’s official news service.

“Drag is over-the-top and joyous,” a pearl-bedecked Isaac Simmons shared, his tall 23-year-old frame balanced atop high heels and crowned with a bright red wig to preach on Pentecost Sunday as his drag persona, Ms. Penny Cost.

A service at Hope Church of Bloomington, Illinois was featured in a video profile of Simmons by Joey Butler and Mike DuBose of the United Methodist News Service (UMNS). Accompanied by upbeat guitar, the video follows Simmons as he embraces congregants and speaks of a spiritual journey that led him to United Methodism.

In March, Simmons became the first openly gay candidate to be certified for ministry in the Illinois Great Rivers Conference of the United Methodist Church. He currently serves as operations director for Hope Church.

Simmons previously admitted surprise that his candidacy was approved through a unanimous vote by the Vermillion River District Committee on Ministry.

“I have a duty to use my privilege to do what change I can — no matter if it’s uncomfortable or not,” Simmons told UMNS. “It’s a divine duty that we all have.”

UMNS is an apportionment-funded agency of the denomination. It’s active, public promotion of Simmons places drag queen ministers within the denomination’s mainstream discourse.

Switching to somber piano notes, the video acknowledges language in the Book of Discipline declaring homosexuality “incompatible with Christian teaching” and forbids the ordination of “self-avowed, practicing homosexuals.” The video transitions to encouragement that Simmons received, including approving comments from Hope Church Lead Pastor The Rev. Jennie Edwards Bertrand who shared her excitement for Simmons’ ministry.

“Despite the controversy, Isaac said he loves that United Methodism is big enough to embrace both conservative theology and a drag queen,” text on the video reads. Simmons names the Biblical Queen Esther as a figure from which he draws strength, citing Esther 4:14 “Perhaps you were born for a day such as this.”

As the United Methodist Church prepares for an expected vote of separation at the upcoming General Conference, theological revisionists anticipate a new reality in a “post-separation” denomination (psUMC) that is expected to discard clergy sexual conduct expectations. UMNS’ promotion of Simmons’ candidacy foreshadows what is likely ahead, with decreasing room for anyone to object to a drag queen preaching in drag from their congregation’s pulpit or appointed as pastor over their congregation.

The full UMNS report can be viewed on YouTube below: