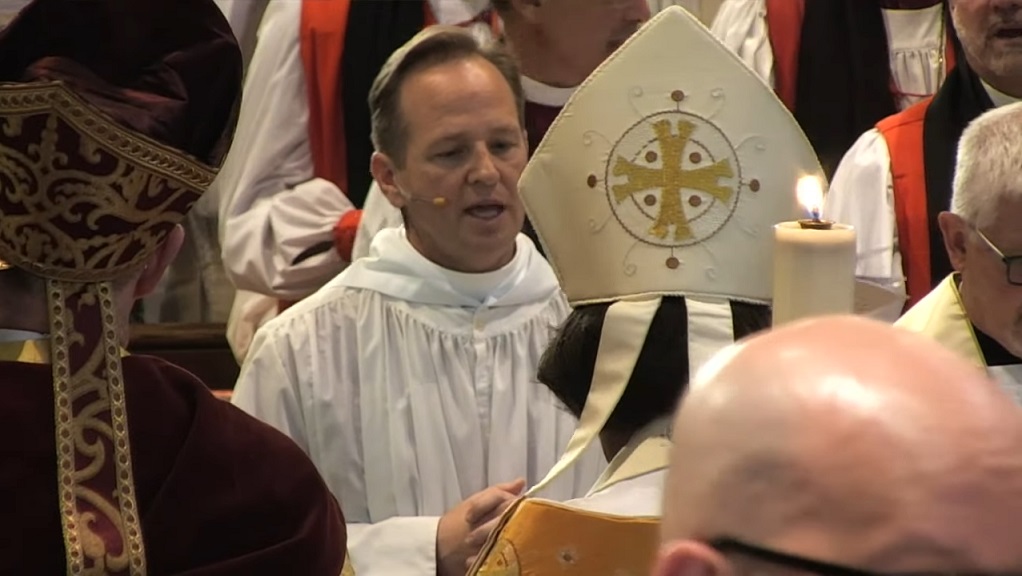 Episcopalians in Maine took part in the consecration of their new bishop this past weekend, the first openly partnered gay man to be installed as a diocesan bishop in the U.S.-based Episcopal Church since Gene Robinson in 2003.

The Rt. Rev. Thomas James Brown was consecrated Saturday as the 10th bishop of the Diocese of Maine at the Cathedral Church of St. Luke in Portland. The service was led by the Most Rev. Michael Curry, presiding bishop of the Episcopal Church.

A video posted on the diocese’s YouTube channel showed participants, including Brown, calling the Holy Spirit a “she” during the recitation of the Nicene Creed. It is unclear if Curry said “she.”

An order of service provided by the diocese lists an unaltered version of the creed, but video of the service, in which only Brown and Curry are shown with microphones, captures the creed being recited as, “We believe in the Holy Spirit, the Lord, the giver of life, who proceeds from the Father and the Son. Who with the Father and the Son, She is worshiped and glorified. She has spoken through the Prophets.”

The original language for the Holy Spirit was adopted by the First Council of Constantinople in the year 381.

Brown’s consecration came ahead of next year’s global gathering of Anglican bishops — known as the Lambeth Conference — that is being overshadowed by the participation of gay and lesbian bishops and their spouses from the Episcopal Church and Anglican Church of Canada. It also occurred as the Diocese of Albany awaits news of a formal charge against their bishop for his refusal to permit clergy to perform same-sex marriage rites, which conflict with Albany’s diocesan canon law.

The Diocese of Maine reports 11,322 members and 3,694 attendees spread across 59 congregations. Membership declined 15.1 percent between 2007 and 2017, while attendance for the same period declined 25.8 percent.

Brown has served at multiple churches in the Northeast, including St. Michael’s Church in Brattleboro, Vermont. It was there where he met the Rev. Thomas Mousin, a then-United Methodist pastor. The couple received a blessing of their same-sex union in 2003 from the Episcopal bishop of Vermont. Mousin has since been ordained an Episcopal priest.

Mousin was involved in several aspects of the ceremony, including composing the text for the hymn “As Once You Took Upon Yourself” that was sung during communion.

The Rt. Rev. Mary Glasspool, assisting bishop of New York, also participated as a co-consecrator during the ceremony. Glasspool, a partnered lesbian, was elected in 2009 as bishop suffragan for the Episcopal Diocese of Los Angeles.

Brown previously worked as director of education for Planned Parenthood of South Central Michigan, a local affiliate of the largest provider of abortions in the United States. He has held prominent roles in the national church. From 2003-2006, Brown served as secretary of the Joint Nominating Committee for the Election of the Presiding Bishop, which resulted in the election of Katharine Jefferts Schori.

Same-sex marriage continues to be a source of controversy within the Episcopal Church and worldwide Anglican Communion with which it is affiliated. Episcopal Church officials object that Archbishop of Canterbury Justin Welby has declined to invite same-sex spouses to the Lambeth Conference.

Welby has also been criticized by Anglican traditionalists, including bishops affiliated with the Global Anglican Future Conference (GAFCON) for inviting those bishops in same-sex marriages or civil unions in contravention of the precedent established at the last Lambeth Conference by then-Archbishop of Canterbury Rowan Williams.

Bishops at the 1998 Lambeth Conference rejected “homosexual practice as incompatible with Scripture” and voted that they “cannot advise the legitimising or blessing of same sex unions nor ordaining those involved in same gender unions.”

Churches that are members of GAFCON number about 50 million Anglican Christians, most of which are located in the Global South.

Dioceses in Ontario and Michigan have also elected openly partnered gay and lesbian candidates for bishop.

Albany’s Episcopal bishop, William Love, remains under a state of partial inhibition due to his refusal to permit priests and churches in his diocese to preside at or host same-sex weddings.

Love explains that he is seeking to remain true to the Holy Scripture and the church’s traditional understanding of marriage.

In his address before the Albany diocesan convention earlier this month, he described the 2018 passage of Resolution B-012 by the 79th General Convention of the Episcopal Church as “a ticking time bomb” launched into the middle of the Diocese of Albany, “waiting to explode.” The resolution mandated that all dioceses must permit the use of same-sex marriage rites.

Love also described an intensifying level of “tension and division between those with differing opinions in the Diocese regarding same-sex marriage.”

“The jury is still out as to whether The Episcopal Church is truly welcoming, inclusive and diverse enough for those of us who cannot embrace TEC’s current progressive agenda,” said Love. “If we are to have a real place in The Episcopal Church, we must be provided a way to remain true to our understanding of Holy Scripture and the sacramental nature of the Church, and to differentiate ourselves from TEC’s progressive actions and beliefs that violate God’s Word (as we understand it), and are so offensive and problematic to the vast majority of the wider Anglican Communion and Body of Christ. Anything less is the equivalent of TEC’s enslavement of its conservative and orthodox members.”

Video of the consecration service has been made available by the Episcopal Diocese of Maine via YouTube and can be viewed here: