Most pastors see Christmastime as a major outreach opportunity in their communities. That’s probably why a new survey examining Protestant churches revealed 89 percent of pastors plan to hold services as usual on Christmas Day, despite it falls on a Sunday this year.

Protestant clergy in the United States recently responded to a survey conducted by LifeWay Research. Senior pastors answered the question: “Christmas and New Year’s Day both fall on Sunday this year. As a result, does your church plan to have services on the following days?” 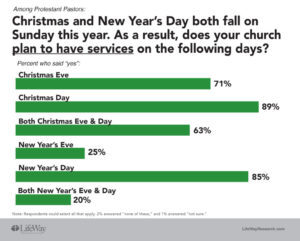 Josh Daffern, a pastor and Patheos Evangelical  blogger, is among the small minority cancelling Christmas Day services. But before we judge too quickly, he says it’s for reasons you might not think. Among those reasons is (1) Daffern’s volunteer-heavy church traditionally takes the last Sunday service of the year to serve the community; (2) they want to be pro-family; and (3) his church is holding multiple Christmas Eve services, as Daffern explains:

Although we don’t know when he was born and most scholars agree it probably wasn’t December 25, the Christmas season is an opportunity that shouldn’t be squandered. So we’re not. One of the highest attended services of the year is not Christmas day but Christmas Eve, which this year falls on a Saturday. So we’re leveraging that high attendance event to present the hope of the gospel in Jesus.

I haven’t come across a church in my community yet that has cancelled Sunday worship on December 25. The only dilemma this presents for my husband and I is deciding where we will attend: my parent’s church; his parent’s church; or our local church.

A good problem to have, I know.

Ten Reasons Why Traditionalist United Methodists Can Be Thankful in 2020