Poll: Politics from the Pulpit

Hearing politics from the pulpit is a common occurrence for a majority of churchgoers, according to a newly released Pew Research Center survey. Clergy most commonly preached about the issues of religious liberty and homosexuality, but far fewer spoke either for or against a 2016 presidential candidate.

In the survey conducted June 5-7 and published August 8, 64 percent of churchgoers attending service in the last few months said their clergy spoke on at least one public policy-related issues. However, many clergy avoid discussing social or political issues on a regular basis. Nearly half of churchgoers said their clergy rarely or never talk politics on an average Sunday. 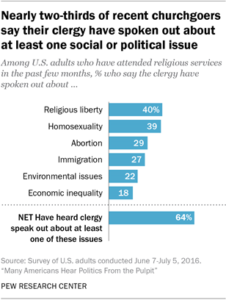 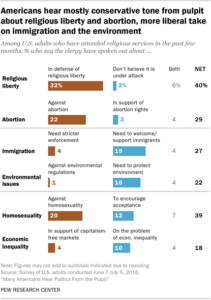 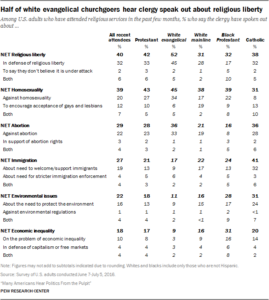 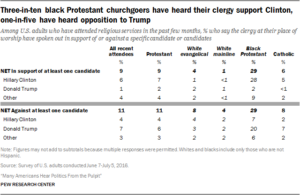 Obviously, it is good few clergy are endorsing candidates from the pulpit. But we hope churches continue addressing social policies. Issues like abortion and homosexuality aren’t political topics, they are sin topics. Churchgoers can also benefit from hearing how Christians can have a well-informed, faithful witness among hostile religious liberty, immigration, environmental, and economic debates. Hopefully, clergy will continue addressing these important issues long after the election polls close.