The United Church of Christ (UCC) believes that “God is still speaking,” as the denomination asserts in one of its slogans, apparently just not through the entire Bible.

John Edgerton, who serves as Associate Pastor at Old South Church in Boston, Massachusetts, wrote the UCC’s daily devotional last Friday. Ironically, he encouraged study of the Bible while challenging its inerrancy and divine inspiration.

“To its earliest readers, the Bible was not a divinely inspired, inerrant document,” Edgerton said. “All we need to do is read the Bible to know that.”

In the very next paragraph, Edgerton wrote that he believed “Bible study is the best medicine for fundamentalism.” The obvious implication was that so-called fundamentalists – ostensibly Christians who believe the Bible is divinely inspired and inerrant – fail to read the Bible thoughtfully and widely enough.

Edgerton said the objective of Bible study during Lent was to lead to a “deeper relationship with the Word of God,” meaning Jesus but not the Bible. He then further developed this dichotomy between Christ and Scripture:

If the Bible becomes an object of worship, then we replace the living Christ with dead letters. And without the living Christ, it is possible to wind up with a faith that denigrates the poor, the unorthodox, the outsider, women, sexual minorities, and hungry children. You know, all the people Jesus loved to be around.

On Sunday, the UCC tweeted a graphic of this quote and Edgerton’s comment about fundamentalism: 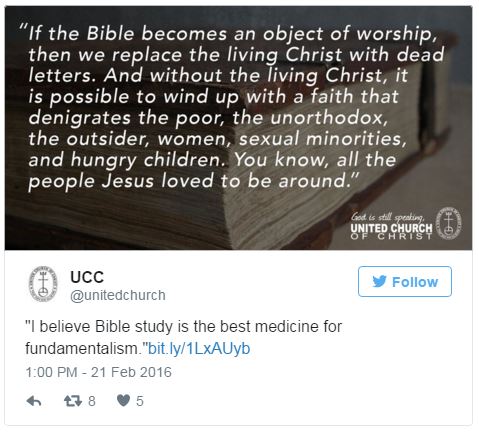 Of course, Edgerton gets it right that the Bible isn’t God. That much is true. But there are plenty of Christians who take the Bible seriously while still loving Jesus and advancing the Church’s social witness.

While orthodox Christians will dispute Edgerton and the UCC over scriptural authority, we can at least agree on one thing: Christians and unbelievers alike should take time during Lent to study the Bible. This should ultimately point them to a greater love and appreciation of Jesus Christ.