What is the secret to New Hampshire’s sudden reversal of fortune? The diocese, which Bishop Robert Hirschfeld assumed leadership of in 2013, changed whom it is counting in a practice that has been advocated by some in the dwindling denomination.

A sudden influx of worshipers would seem counter-intuitive: ever since Robinson was consecrated the denomination’s first openly-partnered homosexual bishop in 2003, diocesan membership declined nearly 16 percent, marriages down 37 percent, receptions down 51 percent, children’s baptisms down 57 percent, and adult baptisms down 75 percent. In short, it’s been a tough decade, not only in New Hampshire, but in all New England Episcopal dioceses.

To put the 2014 attendance jump in context, the closest increase among domestic dioceses was in the tiny diocese of Eau Claire, Wisconsin, which reported a 3.5% increase (up 27 attendees total) while New Hampshire reported a whopping increase of 865 attendees.

Almost all of New Hampshire’s 49 Episcopal congregations continue to be in decline, and only a handful reports any significant attendance growth, not nearly enough to account for hundreds of people added in a single year.

But the diocese reported two new worship sites this year: the Chapel of Holy Cross in Holderness, and the Chapel of St. Peter and St. Paul in Concord. Neither report significant membership, but Holy Cross has 270 attendees and St. Paul has 650. Both chapels of Episcopal preparatory schools, they are reporting weekly chapel attendance to the diocese for the first time. 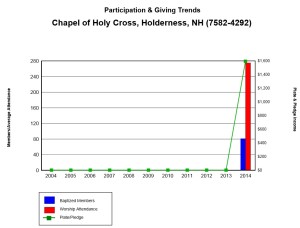 According to the Holderness web site “Students attend two required chapel services each week” and at St. Paul, it is four times a week.

Comparable situations elsewhere in the Episcopal Church where compulsory weekday school chapel services are counted alongside Sunday attendance are sparse to nonexistent, but the idea isn’t completely new.

Virginia Theological Seminary Dean Ian Markham advocated for counting students during his provocative 2013 address “The Myth of the Decline of the Episcopal Church” at the Episcopal Diocese of Delaware’s annual convention.

Markham noted that Episcopal schools educate approximately 16,000 students at 462 institutions, and that these schools offer a weekly liturgy of Episcopal worship.

“Almost certainly we do not count these 16,000 worshipers,” Markham reported, also noting that Episcopal retirement homes offer weekday services. “The net result is that from both retirement homes and schools we ignore 54,220 worshipers every week.”

“As a tradition, we do chaplaincy rather well. We effectively meet the spiritual needs of communities that are often very diverse,” Markham continued. “We ought to recognize this missing 50,000 people in our statistics.” 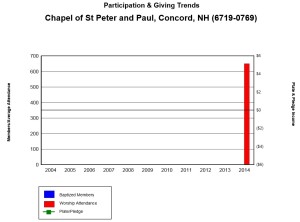 But in Markham’s native Britain, the Church of England doesn’t count these student assemblies as part of its worship attendance figures. About one million children attend Church of England schools including religious assemblies, and about 15 million have attended such schools. If these figures were added to attendance and membership figures, the impact would be massive.

“One of the big questions in chaplaincy is ‘what is the relationship with the diocese and national church?’” explained Episcopal clergy Alice Courtright, Dean of Chapel at St. Paul’s School. Courtright noted that at a 2014 gathering of the National Association of Episcopal Schools (NAES), an independent organization that serves 1,182 Episcopal schools, then-Presiding Bishop Katharine Jefferts Schori took questions about the relationship between schools and the church, and how non-Christian participants in compulsory chapel services should be counted.

Not all Episcopal schools have a connection to their local diocese. According to Diocese of New Hampshire Missioner for Communications Laura Simoes, the diocese has a connection to Holderness and White Mountain School in Bethlehem, NH, but St. Paul’s School is an “ecclesiastical peculiar” without diocesan ties.

Whether these compulsory events constitute Episcopal worship is also open to debate.

Holderness School describes a Thursday evening service as: “dedicated to topics of a broader spiritual, ethical, and moral nature and often features student or guest speakers on an inspirational topic.”

At Saint Paul’s School, the meaning is loosely defined.

“In many ways, ‘Chapel’ refers to the spirit of St. Paul’s and the many ways we celebrate together – not just singing and praying, but also helping others in our local community, improving our amazing natural environment, and committing to social justice,” the school’s web site explains. “While founded in the Episcopal tradition, St. Paul’s School celebrates all faiths – any form of spirituality that inspires compassion for others.”

New Hampshire Episcopalians, known for their progressiveness, may have few criteria for evaluating whom to include among their attendees. But for a small diocese undergoing uninterrupted decline, widening their scope may be the best way to keep their numbers up.