The Berlin Wall and the Hunger for Freedom: Then and Now

The Institute on Religion and Democracy rejoices in the 25th anniversary of the fall of the Berlin Wall, November 9, 1989. President Reagan had urged, “Mr. Gorbachev, tear down this wall.” Likewise, we implore the God of the universe to give us the grace and courage to tear down the remaining walls of tyranny, despotism, and injustice in every corner of the globe, including our own.

Border of Light where the Berlin Wall used to be (Photo credit: Kulturprojekte Berlin/Christopher Bauder)

What a great experience it would be to be in Berlin this weekend, to relive the miracle of the birth of freedom in Eastern Europe. That extraordinary night of November 9, 1989, when the dismantling of the hated wall of concrete and barbed wire took place, is being commemorated with what the Visit Berlin website calls a “Border of Light.” Following the same path as the Berlin Wall, this weekend there will be a new, temporary wall, built of thousands of illuminated balloons.

Visit Berlin explains, “To the strains of Beethoven’s Ninth Symphony in the presence of guests of honour and eyewitnesses at the Brandenburg Gate and at six other locations, white balloons will be released into the skies on the night of 9 November to commemorate the peaceful revolution of 1989 and the fall of the Berlin Wall 25 years ago.” The commemoration extends beyond Berlin. During October, special events were held in the other former East German cities of Plauen, Dresden, and Leipzig, as well. And the irresistible hunger for freedom in the human spirit led the way to toppling despotism throughout Eastern/Central Europe.

After the Berlin Wall came down in 1989, bits of that oppressive construction were transformed into thousands and thousands of icons of freedom (and, one could say, icons of free market capitalism since they were sold widely as souvenirs). My parish, Church of the Apostles, Anglican, possesses a rather large piece, given to us by our friends from Leipzig’s Nikolaikirche (St. Nicholas’ Church) where years of weekly prayer services helped to usher in East Germany’s Peaceful Revolution.

In 1990, these friends from Leipzig and other friends of a now free European continent, from Czechoslovakia, Hungary, and Romania, visited our church for a week-long “Eastern European Festival.” They shared amazing stories of how the hand of God gave strength and encourage to those that helped to bring about liberation behind the Iron Curtain.

Christophe and Ronald were lay leaders from Nikolaikirche, the church that became famous for Monday night prayer services followed by candlelight protests. Thousands of East Germans asked God for His help, and then demanded such rights as the ability to travel to foreign countries and to elect a democratic government. Peacefully, every Monday, the people confronted the armed security forces of the East German Government, proclaiming, Wir sind das Volk! (We are the people!) 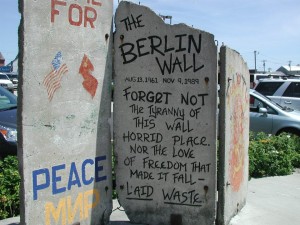 Two Catholic Dominican priests from Czechoslovakia told us about the Velvet Revolution. In their own fight for freedom, hundreds of thousands of people demonstrated in Prague’s Wenceslas Square. Father Vojtech, who was ordained in the Catholic underground, came to us in jeans and a leather jacket. He served at the monastery of the 14th century Church of St. Giles (Kostel svatého Jiljí), just scant of two miles from Wenceslas Square. Father Filip, newly ordained from the seminary in Olomouc, preferred the traditional full-length, woolen habit that priests were now free to wear once again. But both had stood against the Soviet Socialist forces that controlled their country.

Vojtech and Filip told us of the jingling of keys that filled the square during the protests, symbolizing the unlocking of doors. It was an appropriately poetic gesture for a revolution led by Vaclav Havel and members of the Czech art, literary, and theater communities, as well as the factory workers, priests, scientists, and others.

Our Hungarian friends, the Nemeths, were from the Community of Reconciliation. They told of how they were ministering to marginalized Roma people in a newly free Hungary. The brave people of Hungary had fought against Communist occupation in 1956 and their revolution was crushed. But in 1989, the Communist government of Hungary actually helped to usher in the collapse of the Iron Curtain and the fall of the Berlin Wall. In June of that year the foreign ministers of Hungary and Austria symbolically cut through the barbed wire on their borders. A few months later Hungary allowed tens of thousands of East Germans to cross its border to flee to the West.

Romania’s revolution was not peaceful like the others, but our friends Valentine and Mikhail explained how it started with a protest by church members in the western city of Timisoara. The Romanian government was attempting to evict Pastor Laszlo Tokes, the assistant pastor of the Romanian Reformed Church. He was targeted because routinely he gave sermons condemning the government’s oppression of religious freedom and other human rights. A human chain of church members was joined by university students and others, both Romanian and Hungarian. Soon the protest became a more general anti-government demonstration that spread across Romania to bring down Communist dictator Nicolai Ceausescu in Bucharest. 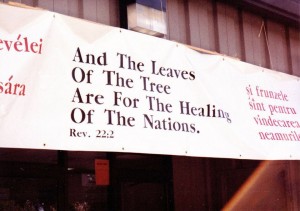 These Eastern European friends were witnesses to the Church’s stand against evil and oppression. Listening to their stories, we appreciated the blessing of our own freedom in the United States as never before. We thanked God for the role that America played in bringing freedom to other nations. And we understood that with great blessing came great responsibility. Today a tribute to the 25th anniversary of the fall of the Berlin Wall on the website of the German Mission in the United States says, “We celebrate this anniversary with thanks to our American friends for their unwavering support for German reunification.”

In a speech found on the same website, Federal Foreign Minister Frank-Walter Steinmeier paid a tribute to the fall of the Berlin Wall from what he called “a truly historic place,” explaining that it was from there, in the extension of the Reichsbank, “built during the time of the National Socialists – that Hitler’s Germany funded its terrible war of annihilation.” He continued that the location also served as the headquarters of the Central Committee of the SED (Socialist Unity Party) regime in the time of German Democratic Republic, but it was looking out the window in that same location that the “hardliners of the regime could see they had lost their fight against their own people.”

“We are both pleased and grateful that the people in East Germany brought down the Berlin Wall with such great courage and heroic effort, before going on to sweep away the GDR regime within a few months,” Steinmeier continued. “Their courage and desire for freedom gives us a responsibility towards the future, in particular here in this place.”

Today many Americans, as well as others, seem to have forgotten the value of this gift of freedom. But perhaps an event taking place at the German Embassy in Washington, DC on November 13 will help people to remember. A large segment of the Berlin Wall is coming to Washington, DC to be unveiled at the Embassy on the 13th as a gift to the Atlantic Council from German energy company Verbundnetz Gas.

Germany is also remembering and honoring those who lost the fight for freedom. A recent article by Hope Harrison in the Wilson Quarterly argues that “The Germans would have to grapple with the worst part of the history of the Wall – the killing of people trying to escape – before coming to celebrate the best part of the history of the Wall: its peaceful fall.” The Freedom Memorial at the Checkpoint Charlie Museum established 1,065 wooden crosses dedicated to people who had lost their lives trying to escape, but the true number could be even higher. 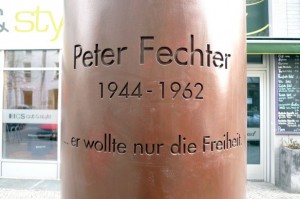 The Berlin Wall Memorial and the Center of Historical Research in Potsdam, who have conducted a four-year study on the killings, found that most of the victims were young men between the ages of 16 and 30. Sadly, many of the soldiers who shot them were about the same age. Peter Fechter was only 18 years old when he became one of the first victims of the Berlin Wall border guards and was shot trying to climb over the wall on August 17, 1962. He fell back onto the east side of the wall and bled to death. The boy’s agonizing, hour-long death was witnessed by people on both sides of the wall, but his screams for help went unaided, with both sides afraid to intervene.

The memorial to young Peter Fechter constructed on the Zimmerstrasse at the spot where he died reads, “he just wanted Freedom.” May the spirit that moved Fechter and others for whom only death brought freedom speak once again to those struggling under a new despotism, the violent, intolerant ideology of Islamism, which has gained power through the passivity and political correctness of both European and the United States governments and through accommodation by anti-Western secularist Leftists.

Islamists seek an Islamic state in Europe, under Shari’a law, just as they are attempting to now establish in the Middle East and North Africa. Accommodation and über-tolerance of these extremists have led to “no-go zones,” Islamist enclaves euphemistically named “sensitive urban areas” (SUAs) in France, Germany, and elsewhere. Police and non-Muslims do not enter these areas which operate by their own law. Eastern Europe, and particularly Germany, must act to maintain the freedom for which they fought or else succumb to this new form of tyranny.

In America we face the same threat, usually still in the form of a “stealth jihad,” the creeping insurgence of Islamist ideology in America. But increasingly, the attack on American sovereignty and freedom is becoming overt – such as in the jihadist attack on our soldiers at Ft. Hood, the Boston Marathon bombing, the honor killings of Muslim women and girls in Dallas, Phoenix, Buffalo, and elsewhere, and the beheading of Americans both by IS abroad and by Islamists right here in America. 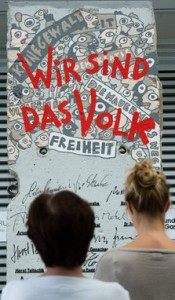 Segment of Berlin Wall coming to the German Embassy in Washington, DC (Photo credit: German Mission in the United States)

In our case, this new despotism is not just aided by passivity and political correctness and by pathological denial on the part of secular and religious, liberal and conservative society, but by our own government’s increasing attempts for heretofore unexperienced control that are weakening our country. It remains to be seen if the victories of the mid-term election by the Republican Party, that claims to prefer “small government,” can strengthen the hunger for freedom once again.

The East Germans’ cries of Wir sind das Volk should remind us that a democratic republic has to be ruled by the people, not either a foreign ideology or a government imposing its will on them. We should hear the warning of Hungary’s national poem, recited during the revolution, “Stand up, Hungarians, your country calls. The time for now or never falls. Are we to live as slaves or free? Choose one. This is our destiny!” and of Romania’s old national song sung by protestors fired upon by the Securitate, “Wake up, Romanian, from your deadly sleep, Into which you’ve been sunk by the barbaric tyrants. Now or never, your fate renew, to which your enemies will bow to.”

We should follow in the footsteps of the freedom-hungry Eastern Europeans, or else someday there will be a memorial to America constructed on the Mainstrasse in every U.S. city, and it will read, “We just didn’t want Freedom enough.”

The Greater Tide and the Bloodstained Shore

The Body They May Kill: Remembering Archbishop Janani Luwum