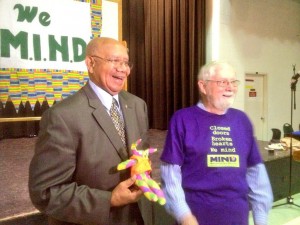 By Jeffrey Baker of Pleasant Valley UMC in New York

The Methodists In New Directions (M.I.N.D.) Luncheon during the 2013 New York Annual Conference featured a talk by retired United Methodist Bishop Melvin Talbert.  In addition to speaking at this lunch, Bishop Talbert was also a guest during the Annual Conference Saturday morning Service of Ordination, Commissioning & Recognition.  During the June 7 lunch at Hofstra University a few words were also shared by retired Yale Divinity School Dean and ordained United Methodist Tom Ogletree, who faces charges for violating United Methodism’s prohibition on same-sex unions by marrying his son to another man.

Bishop Talbert spoke at length on the notion of justice and how individuals should respond to laws and rules they feel are unjust.  He used Ogletree as an example: “…[He] is a living example of biblical obedience.”  And he challenged us to consider if we will convict him as a church body using what many feel is an unjust and immoral law. Talbert recalled that while bishop of the California-Nevada Conference he investigated but did not prosecute 68 clergy who together conducted a same sex union in 1999.

Talbert suggested a few ways to think about this issue.  One way would be like John Wesley, who centered his ministry on “do[ing] the right thing.”  Citing Mark 12: 28-32, he said, “Wesley made it [doing the right thing] the focal point of his doctrine of Christian profession.”  Another approach is to refer to Micah 6, which summarizes the theological underpinnings of many issues where God asks us to support justice, mercy and walk humbly.  The final way to think about this that was presented was in the form of three simple rules: 1) Do no harm, 2) Do good and 3) Stay in love with God.

To give us some examples of these ideas, Talbert then presented a brief historical perspective of the world wide scope of today’s United Methodism.  This included what we do as a church in responding to global disasters as “the first to arrive and last to leave,” as well as our VIM (Volunteers in Mission) initiatives.  Some of the, “valley[s]” of past Methodism was also discussed including splits over slavery, segregation, and adding language in our Discipline against the homosexual practice.  Some history that would suggest that, “…particularly in the US, we are not a healthy church.”

Talbert brought the lunch audience to their feet by suggesting that some church rules are “…immoral and unjust and no longer deserve our loyalty and obedience.”  He reiterated that, if asked, he would perform a same sex marriage and feels at peace with himself and with God about it.  And he recounted a conversation he had with his granddaughter, who said the church is talking about her friends, and she feels these discussions do not welcome them. Talbert is concerned the church will loose her generation.

In conclusion, Talbert made three points:

2) We have a dual allegiance at the moment to God and our church and he is hoping we all know how the priorities should be arranged and,

3) Even our church can be saved if it confesses its sin and he left by asking us to, “…do the right thing.”

The luncheon was concluded with a few words from Ogletree, who had “…provided a public witness for justice.”  He thanked the M.I.N.D. community for their support and the hundreds of well-wishers from whom he has heard.  Ogletree echoed Talbert in saying an “unjust law is no law.” Ogletree’s suggestion for moving forward is to get everyone to work together to change unjust rules.

Ogletree noted he is sometimes asked about leaving the United Methodist Church.  He said many people around the globe are shaped by Methodism and that if the church can recognize its disapproval of homosexual behavior as a mistake it will have broad influence on many societies.  He has also heard suggestions of a local option or “states rights” solution.  But he believes that as a global church, United Methodism should want to have a unified global solution.

Ogletree responded to the standing ovation by leading everyone in a verse of, “We Shall Overcome.”