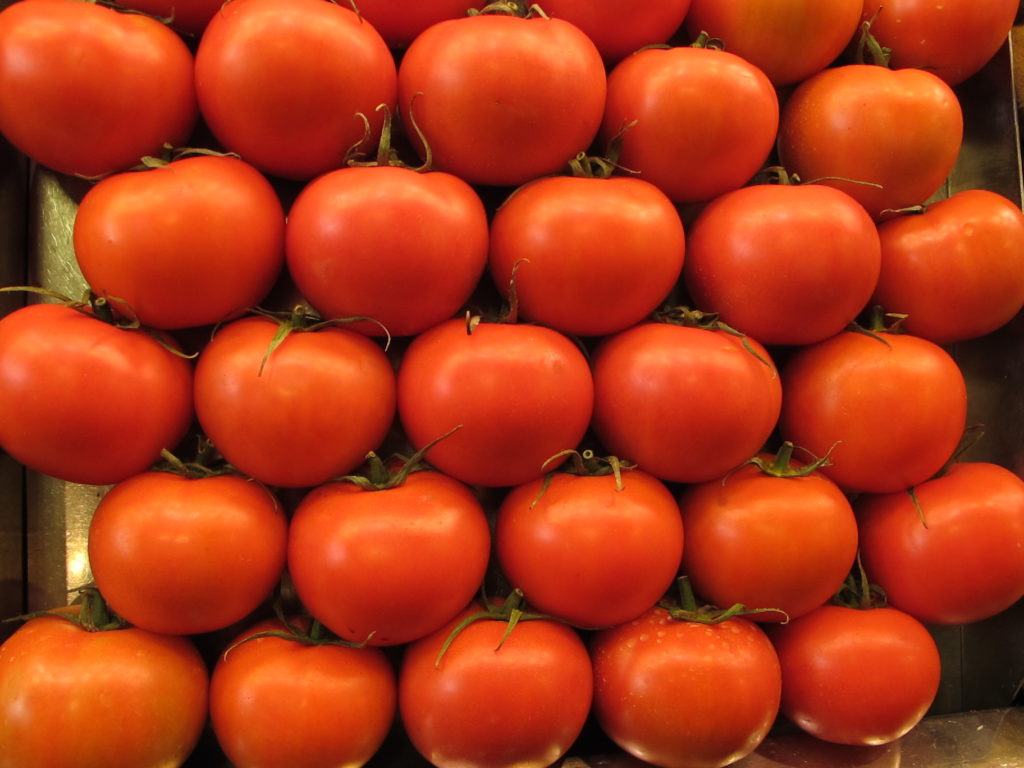 It’s no secret that there are tense, irreconcilable, and often emotional differences between United Methodists. But surely our divisions would never escalate to the point of literally throwing tomatoes, right?

Last week Jay Therell and Col. Russ Graves, the president and council chair of the Florida Wesleyan Covenant Association (WCA) chapter, were invited to give a presentation at a local church before a divided audience that included some vocal liberals. As the two evangelical leaders returned to their cars, they noticed something on Therell’s that was not there before the presentation. Within the short period that Therell had parked there, someone pelted his car with tomatoes! He had to scrape off the seeds the next day.

I am told that his car was parked in such an out-of-the-way spot that whoever did this must have been someone who had been at the church for his presentation.

Such tomato-throwing hatred against a conservative Methodist leader did not happen out of nowhere. It reflects the culture that Bishop Ken Carter has chosen to foster within the Florida Conference.

Therell has shown a deep, self-sacrificial commitment to our church. He walked away from a career as a lawyer to become a United Methodist pastor. Then he left the perks and prominence of being a district superintendent, took a leave of absence, and devoted himself full-time to the Florida WCA (here is a more detailed account of that).

But over the past year, the Florida Annual Conference leadership, of which Bishop Carter is the head, has chosen to single Therell out for an unprecedented level of bullying and harassment. This escalated to a notorious letter from the Revs. Magrey de Vega and Debbie Allen, the chair and vice-chair of the Florida conference board of ordained ministry (BOOM) demanding, in a rather “Big Brother” fashion, that he comprehensively provide details and even comprehensive video recordings of any and every meeting with United Methodist clergy and laity. They further demanded that he stop meeting United Methodist clergy and laity, even when invited, without first obtaining the permission of the district superintendent for that area (permission which he could reasonably suspect would be denied). These requirements imposed on Therell went far beyond anything in the UMC’s governing Discipline and would greatly limit the chances for congregations to receive accurate information about their options under the coming separation.

“All along I have refused to share the names of clergy and churches. There is a real fear on their part that they will be victims of retaliation for holding traditionalist views. Local pastors in particular are concerned as they might have their licenses discontinued. Churches have been afraid that their traditionalist pastor would be moved and a progressive one put in their place. Recent events in the North Georgia, Greater New Jersey, and Cal-Pac Annual Conferences have only served to deepen those concerns.”

So while Bishop Carter and his BOOM have taken a rather permissive approach to liberal clergy who blatantly violate the UMC Discipline, Therell was effectively bullied into surrendering his ordination credentials and becoming a layman once again, as punishment for his commitment to the UMC’s own official, biblical doctrinal and moral values. You can read more details here.

One of the few things that American United Methodist bishops do very effectively is pass the buck of responsibility.

But let’s be clear: the current Discipline gives bishops an incredible amount of power. In the Florida Conference, the buck stops with Ken Carter. Bishop Carter nominated the members of the Florida BOOM, and hand-picked each district superintendent. And how bishops choose to use, or not use, their “bully pulpit” has tremendous influence in a conference’s culture.

Anticipating that others would report on Therell’s effective defrocking, I tried a different approach of offering Bishop Carter an olive-branch opportunity to at least partially put to rest some of the fears of pastors in the Florida Conference, as well as in Western North Carolina, which he will also lead on September 1.

I tried inviting Bishop Carter to make clear, in very general terms, without arguing about the specifics of Therell’s case, his commitment to a culture in his conference in which everyone’s right to freedom of speech and freedom of choice as we prepare for the future could be respected, without being mistreated.

What statement of affirmation, agreement, disagreement, or comment of any sort are you willing to offer on the call of these two sentences?

For each of these three questions, it would have been very easy for Bishop Carter to simply say, “I agree.”

But he would not.

Initially, he only asked me to include in any reporting on Therell’s case the following statement that he sent Therell:

“The Florida Conference has received your letter of withdrawal with respect.  The clergy relationship is with one’s peers, and that body will act upon your request. We disagree with your interpretation of events over the past two years, and with your characterization of the mission of the conference, our faith, our beliefs and our adherence to scripture. Yet we do so in a ‘catholic spirit.’ We consider you our brother in Christ, and wish you the best in your life and activities.”

(Despite disagreeing with Therell’s “interpretation of events,” in correspondence with me, Bishop Carter notably did not dispute the accuracy of the infamous bullying letter from his BOOM leaders, which Therell posted online.)

After repeated back-and-forth correspondence (which I made clear was for the record), Bishop Carter consistently declined to directly answer of my three questions above, finally only telling me “I remain committed to the protocol, which is now in legislative form and is the work of the delegations, and the values of the protocol and how we characterize one another with grace and reconciliation in this interim season.”

Bishop Carter’s re-affirmation of support for the Protocol and its values is not nothing.

But it is hardly sufficient.

If Bishop Carter supports the right of everyone to make their own choice in the coming separation, and truly does not want to see anyone in our denomination (even those outside of his own liberal faction), bullied, harassed, or otherwise mistreated along the way, then why would he repeatedly refuse to explicitly, clearly affirm this when asked directly?

If Bishop Carter wants United Methodists to have freedom of speech to share and discuss accurate information about the Protocol and the future of Methodism, even if he and his deputies are not in control of every one of these conversations, then why would he repeatedly decline to simply say so?

When I privately expressed my disappointment in Carter’s response (and lack thereof), one knowledgeable observer asked me what would be in it for Ken Carter, personally, to answer my questions more directly or affirmatively.

A dramatically disgraced past governor of my former state was notoriously known for making “what’s in it for me?” the driving question of his politics.

I would have liked to have expected better from leaders of my denomination.

But the sad reality is that the Council of Bishops as a whole, and a great many individual bishops, seem to be primarily driven by a narrow focus on their own self-interest, particularly their zeal to amass and hoard power, wealth, and property for themselves. Other concerns about the health, faithfulness, and mission of the church are treated as distant seconds to this priority. Among the American bishops, good luck finding much willingness to sacrifice a fraction as much as Therell has for the sake of the gospel. I say all of this advisedly, as a long-time observer of the Council of Bishops who has had at least some direct interaction with most of them.

Plenty of other supposedly moderate bishops or supposedly centrist caucus leaders have shown a similar lack of interest in “calling off their attack dogs” or raising a finger to help stop even rather extreme hateful and abusive treatment of theologically orthodox United Methodists. The indirect complicity of Bishop Julius Trimble (who is now in Indiana) in the vicious bullying of three evangelical Iowa pastors out of United Methodist congregational ministry is one especially notable case.

Hate overflowing to the point of liberal Methodists throwing tomatoes, along with other recent examples of sub-Christian mean-spiritedness in the UMC, is a natural result of such failures of leadership.

To be fair, I know there are a minority of faithful bishops who are actually committed to the UMC’s historic and still-official doctrinal and moral standards.

I should also mention that Bishops Bruce Ough (at the end of his tenure in the Dakotas), Laurie Haller (Iowa), and Cynthia Moore-Koikoi (Western Pennsylvania) have done some excellent work in helping people across the theological spectrum in their conferences prepare for the future, and shown some willingness to sacrifice. This is particularly remarkable given how all three of these bishops are rather liberal, with track records of which I have been rather critical. So not all liberal bishops are the same.

That said, we cannot ignore the long, widespread pattern of many, and perhaps the majority, of bishops’ shortsightedly prioritizing their own self-interest.

Relatedly, liberal bishops and others are now energetically seeking to woo theological traditionalists into choosing the liberalized post-separation United Methodist Church (psUMC) rather than the Global Methodist Church (which will continue our denomination’s current doctrinal and moral standards). And some of this marketing has been misleading.

After the separation, the dynamics within the psUMC will shift dramatically, especially after it elects new bishops. PsUMC bishops can be expected to feel much less incentive than liberal UMC bishops do now to be nice to conservative members.

When Bishop Carter is so reluctant to make even the tiniest gesture to defend evangelical pastors from bullying and Orwellian crackdowns on free speech now, why should any evangelical in Florida, Western North Carolina, or elsewhere expect better treatment after the separation? Even after the psUMC officially liberalizes its sexual-morality standards (as the Protocol Preamble explicitly envisions). Even after they get a newly elected bishop who is so far left that s/he makes Ken Carter look like John McArthur by comparison.

Remember, the BOOM and district committees on ministry are the main gatekeepers for deciding who can and cannot become United Methodist pastors, and the latter can very easily discontinue pastors in the technical sub-category of licensed local pastor. When we are already seeing this much blatantly anti-evangelical discrimination from these bodies, and such lack of interest by Bishop Carter in restraining their anti-conservative biases, then how many theologically conservative, Bible-believing new pastors can we expect them to approve after the separation? How will traditionalist congregations who choose the psUMC find a like-minded pastor after their current one retires?

The reality is that the Protocol offers a relatively narrow window of opportunity for conferences and congregations to continue with the Global Methodist Church.

The time is now for our congregations to get the facts and prepare for the future.

We the Fallen People A Layman’s Concern about the Future of the American Clergy