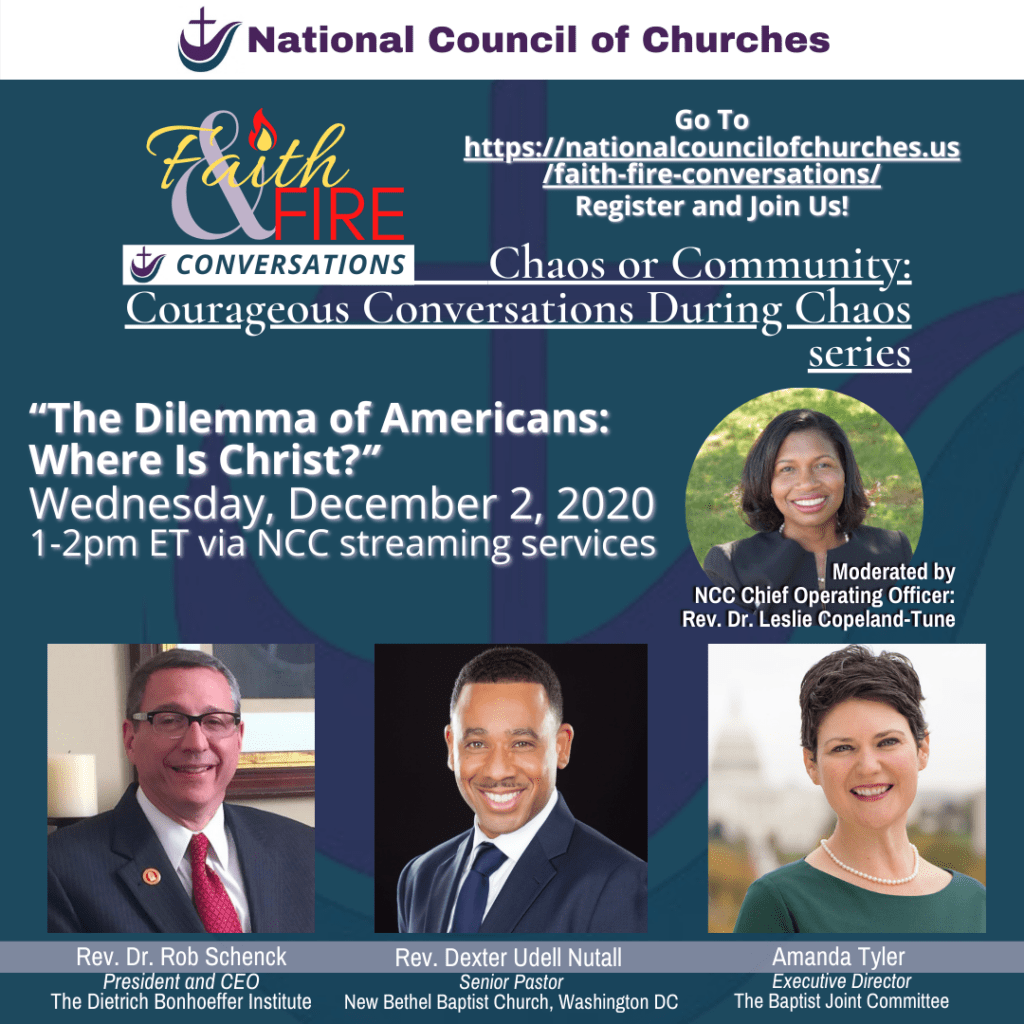 National Council of Churches Panel: Idea of America as a Christian Nation is Almost “Toxic”

Panelists in a National Council of Churches (NCC) conversation held on December 2, titled “The Dilemma of Americans: Where is Christ?”, shared many critiques of both America’s founding institutions and the current and historical state of Christianity in the country. Despite the conversation’s title, panelists instead focused on the topics of Christian nationalism and race relations in America.

Assertions made by participants in the discussion included linking white nationalism to Christian nationalism, comparing America’s evangelicals to evangelicals in 1930s Germany, and calling the church complicit in racism and white supremacy.

The panel, part of an ongoing “Faith & Fire” conversation series titled “Chaos or Community: Courageous Conversations During Chaos,” was moderated by Rev. Dr. Leslie Copeland-Tune, NCC chief operating officer. “Now we’re at this place where it’s almost toxic, if I can use that word,” stated Copeland-Tune early in the conversation regarding the pervasive idea of America as a Christian nation.

“There has been a snowball effect [of America being considered a Christian nation] that has really fed into the idea of white nationalism, of Christian nationalism,” continued Copeland-Tune. Panelist Amanda Tyler, executive director of the Baptist Joint Committee, agreed with and expanded on this notion.

“This ideology is really pervasive. It’s long-standing. It dates back at least two centuries,” Tyler stated. “Christian nationalism really does rely heavily on this mythical founding of the United States as a Christian nation.”

Panelists not only attributed many of America’s current ills and polarization to Christianity and Christian nationalism, but also implicated the church and Christianity in systemic racism in America, a topic which, of course, has come to the forefront of civic dialogue in 2020.

“We’re thinking about a country that was founded on principles of racism,” Tyler stated at one point in the conversation.

“Just like Christian nationalism is so pervasive and can’t be separated from the American experience, neither can racism,” Tyler continued. She furthermore promoted the grassroots campaign “Christians Against Christian Nationalism,” which Tyler leads in her role as executive director of the Baptist Joint Committee for Religious Liberty.

Panelist Rev. Dexter Udell Nutall, senior pastor at New Bethel Baptist Church in Washington, DC, emphasized the complicity of the church in America in racism and white supremacy. “The Founding Fathers were complicit in what it is that we are experiencing today, and I think that it is important that that be acknowledged and appreciated, and as Christians, that we repent,” Nutall asserted.

The moderator and panelists took up “us” vs “them” rhetoric, often using the “other,” but never defining concretely who belongs to the “other” category. (Although, one can presume they were referring to Christians with different political affiliations than themselves.) “Their Jesus just doesn’t reflect the Jesus that we know in our sacred texts,” stated moderator Copeland-Tune, without defining the “they.”

Rev. Dr. Rob Schenck, president and CEO of the Dietrich Bonhoeffer Institute, however, was more restrained when referring to those Christians with opposing views. “All of us just have to be careful about how we characterize the ‘other,’” said Schenck.

Schenck, however, did not hesitate to criticize American Christians, especially those in his own community, as an evangelical. “I look back and see the error that the evangelical Church in Germany committed [in the 1920s-30s] is the same error that my community is committing today,” stated Schenck. “And that is to confuse the political with the religious or the spiritual.”

Though the conversation’s official title suggested it would be centered on Christ, He was rarely mentioned in the talk. One notable exception came when, in assessing how Christians of all political affiliations can move forward from the current place of deep division, Schenck asserted that “the cure is to return to the central tenet of our faith — Jesus.”

As Americans approach the new year still confronted by our deep political and cultural divisions, one can only hope that more American Christians follow Schenck’s suggestion. We must let our commonalities as Christians unite us, rather than letting our political differences divide us further.