Americans: Heaven and Jesus, Sure. Hell and Sin, Not So Much

It’s bad news for theology lovers: Americans love God, Heaven, and Jesus, but are inconsistent when it comes to doctrine, a new study shows.

Though 61 percent of Americans believe Jesus is divine, 64 percent say God accepts worship from all religions, according to LifeWay Research’s survey on theology. A bright spot was that Americans with evangelical beliefs were less likely to accept a Universalist God, but not by much (48%).

On Heaven and Hell, Americans were again murky on the doctrinal details. The concept of eternal judgement proved especially unpopular. Only 4 in 10 Americans believe Hell is where God sends all people who do not accept Christ as their savior. But 60 percent of Americans believe all people are reunited with loved ones in Heaven. Especially surprising 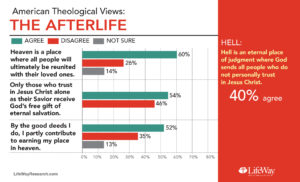 was those with evangelical beliefs (64%) were most likely to agree all people go to Heaven when they die.

It would seem incompatible then for 54 percent of Americans to agree “only those who trust in Jesus Christ alone as their Savior receive God’s free gift of eternal salvation.”

Original sin too comes up short within American belief systems. Lifeway found 65 percent of Americans believe everyone sins, but most people are inherently good.

As the product of Evangelical youth groups and an “inter-denominational” Christian campus ministry where the concept of sin went unspoken, I’m not shocked most Americans believe humans are naturally good and deny the idea of eternal judgment. If these messages are being churned out (or insinuated by silence) by leaders within the Church, how can we expect society to get it right?

Re-visioning salvation, not as coverage for sin, but rather a healing for shame is an increasingly trendy theme especially among “post-Evangelical” pastors, authors, and cultural influencers.

Back in June, I heard the pastor of Nashville-based Gracepointe Church, Stan Mitchell, re-imagine the concept of original sin at the progressive Christian Wild Goose Festival. “We were told that the reason we were born separate from God is because we are all sinners…because of something two people did thousands of years ago in a primordial world,” said Mitchell from the Mainstage. “God does not separate from us. But estrangement is my sense that God cannot be with me in my brokenness.”

A nice-sounding (albeit self-absorbed) concept, maybe. But incredibly damaging. If Christians do not accept humanity is born into this world broken, then do we need Jesus? Beyond that, why would we expect society in general to believe us when we tell them they need Jesus too? I mean really need Him, seek Him, talk with Him, cherish Him, depend on Him, thank Him, and love Him and His instructions.

Look, I’m still playing catch up when it comes to theology. But I’m pretty sure humanity’s original sin and Jesus Christ’s saving grace are not mutually exclusive concepts.

“Basic Christian theology is easy to find on a church’s beliefs webpage, yet most Americans don’t understand how the pieces are related,” said Scott McConnell, executive director of LifeWay Research, as reported by Baptist Press.

Indeed, the pieces of historic Christian teaching need to be puzzled together. But this will need to start in very places discipling Christians: from our pulpits, in our Sunday school classrooms, within our campus ministry small groups, and especially in our own homes.

When the local church moves away from trends and back towards a classical approach, we will likely see a less confused state of theology in America as a whole.

Other central findings from the survey of 3,000 adults that was conducted April 14-20 and has a margin of error of plus or minus 2.0 percentage points includes:

Readers: What strikes you about LifeWay’s study? What actions should be taken to help resolve the confusion surrounding Christian doctrine?