Last week the annual Southern Baptist Convention (SBC) convened in St. Louis, Missouri. Simultaneously, the Baptist Press, which is the official news outlet for the SBC, released the denomination’s 2015 Annual Church Profile (ACP). Among other things, the report listed a decline in overall baptisms. Does this indicate a fateful future for the world’s largest Protestant denomination?

The ACP, compiled by LifeWay Christian Resources in cooperation with Baptist state conventions, details baptisms, churches (including church plants), total giving, and total missions giving for over 46,000 SBC churches. Of the 42 state conventions and 1,139 associations, the ACP reports there to be 46,793 churches, an increase of 294 churches from 2014. Yet, even with the addition of nearly 300 churches the ACP also noted total membership was down over 200,000 from 2014 and total baptisms down a little over 10,000 from 2014. 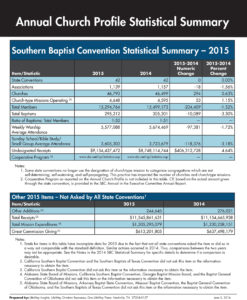 Over the past two years, former President of the SBC Ronnie Floyd made it his mission to foster a heart of awakening among SBC churches; his chosen theme of the 2015 and 2016 conventions being “Great Awakening” and “Awaken America” respectively. In his welcome letter to convention attenders Floyd wrote, “…We come together to agree, unite, and pray for the next Great Spiritual Awakening to come to America and to work together to reach the world for Jesus Christ.”

These words were common talk among the messengers and attenders of the convention. It was a resounding sentiment among Southern Baptists to see more churches planted and more sinners converted and baptized. Nonetheless, no one can deny the reality of fewer baptisms and less church members. So, where does the convention stand and what has led to this decline?

I believe there are multiple reasons why we are seeing a decline in baptisms and church membership in the SBC, and not all for bad reasons.

First, I believe there is increasingly less societal pressure for people to “go” to church simply because that’s what they should do. And, because of this people now feel liberated from calling themselves Christians. This isn’t necessarily a bad thing. Because many of these people were once unregenerate members of SBC churches, so in a way we are now beginning to see a more accurate picture of the true church. Nevertheless, it must be mentioned that many SBC churches are increasingly preaching a watered down Gospel and placing no emphasis on calling Christians to repentance and holiness. Therefore, being not too different from the world, and providing no real reason to be a part of a church.

Second, Christianity in America has been under attack from the Left, Christians are often called bigots and close-minded simply because we hold to our Biblical beliefs. I believe the millennial generation is, unfortunately, being influenced by this liberal ideology which is seeking to redefine what “love” actually is. They see it as loving to accept everyone and affirm any life style.  Conversely, Christians, and the SBC in particular, see it as most loving to recognize sin as harmful, in love and grace proclaim the Gospel, and encourage a life marked by holiness.

Third, it is no secret that our culture and society are becoming more liberalized. Yet, the SBC has been faithful and firm on Biblical convictions on issues such as salvation through Christ alone, the Bible as the authoritative word of God, and our stance on marriage, family, human dignity/sanctity of life in the midst of a sexual revolution. This surely, will not make us friends with all.

Fourth, there is a renewal in the SBC especially among Reformed men and women, who are taking church membership and discipline more seriously. In an effort to make sure that those who are “in” the church by membership are truly regenerated baptized believers-a Southern Baptist distinctive. And, losing those from the church who are not regenerate believers.

Also, it’s interesting to note that some younger pastors who are joining churches are going through the membership rolls to scrub them of people who are no longer active members of the church for one reason or another.  Personally, I see this as healthy administration within churches. It simply provides a more accurate representation of the church. Therefore presenting a better witness of Christ and his Church to the world. It does no one good to simply “dub” them Christian when their lives do not reflect the faith, neither is it helpful to the world to present a false view of the Church.

Ultimately, I see a bright future for the SBC. Yes, we need to be ever more vigilant about sharing the Gospel of Jesus, sacrificially seek to start new churches and send missionaries, and ever be in prayer that God would be glorified in all we do. But, I am hopeful. From my young Southern Baptist vantage point, I see many faithful Southern Baptists seeking to cultivate healthier churches and present a better picture of Christ to the world. If the recent convention and resolutions passed is any picture of our future, then I would say we are headed in the right direct. Agreeing, Uniting, and Praying for a faithful witness of Christ! 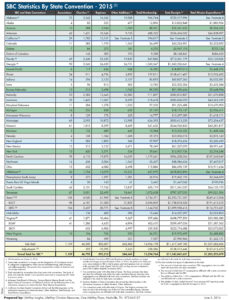 Imagine That! A United Methodist Bishop Humbles Himself, Publicly Apologizes

Maxie Dunnam on “Born of Conviction,” His Ministry, and the Future of Methodism