An Interview with Pastor Garret Kell: “Before We Take a Stand, We Must Begin on Our Knees”

Settling into his role as Pastor of Del Ray Baptist Church in Alexandria Virginia, Garrett 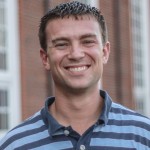 Kell, who recently gained broad notoriety with his blog, “What Would Jesus Say to Someone Like Leelah Alcorn?,” kindly shared some of his time to explain his vision for ministering to Christian professionals, evangelists and activists in Washington D.C. in an interview with IRD’s Chelsen Vicari.

Chelsen: “Can you tell us a brief bit about your personal testimony? When did you first recognize your call to pastoral ministry?”

Kell: “I grew up in West Virginia and then went to Virginia Tech. That’s where I came to the Lord when I was 21 years old. I grew up in a United Methodist church but didn’t care much about God.”

Vicari: “What did you study while at Virginia Tech?”

Kell: “For the first three years I studied beer. Beer and marketing. I was into a lot of drinking and drugs and everything that comes with that lifestyle. One year I had a Halloween party and invited this friend down. His name is Dave. Dave came down and I brought him back into my bedroom and said, “Hey man I got a bag of weed, a sixer of your favorite beer, I got a girl for you to meet. This is going to be a great weekend.

Dave closed the door and he sat on the bed and said, ‘Man I need you to know that I don’t do any of that stuff anymore.’ I said, ‘Okay. Good for you. More for me.’ But it haunted me because I remembered him talking about how he loved Jesus now. Dave told me that it wasn’t going to be an easy weekend for him, but he told me that the Lord loves me and that’s why he came. I call that moment ‘The Stand.’ And every Halloween I give Dave a call and thank him for The Stand. (You can read more about Garrett’s soul-changing encouter with Dave here: “The Stand that Saved My Soul“)

Over the next couple of weeks I was haunted by this conviction. I was giving Dave a hard time and he said why don’t you start reading through the Bible. So I did. It wrecked my world graciously. Somewhere during the [following] December there was another encounter like that. Then it was March that the big turn happened in my life.

So I graduated in 2000 and went to Texas. Was there for 10 years and studied under a pastor down there, went to seminary and planted a church. So I became a Christian when I was 21, became a pastor when I was 25, so I had longed to sit under an older, wiser pastor for a while. So there is a pastor here in Washington D.C., his name is Mark Dever, and I went and was on staff [at Capitol Hill Baptist Church].

At this point, I was either going to go to Dubai or was going to stick around here and find an existing church here that was dying and help it out.”

Chelsen: “Dying. Was that the state of Del Ray Baptist Church before you joined the church’s leadership team?”

Kell: “Del Ray Baptist Church started in 1897. During the 1950s, 60s, and 70s it was a big flagship Baptist church in the area. Then it started to dwindle in the 80s, 90s and 2000s. About four years ago membership dwindled down to about 5-15 people. It had about died off. There was a valiant Army chaplain who showed up on Sunday to go to church and there was nobody to preach. He asked, ‘Who’s preaching.’ They told him they didn’t have a preacher so he said, ‘Well, I’ll preach.’

The congregation reached out to Mark Dever and said we need some help. Mark Dever said, ‘we’d be happy to help you guys.’ The agreement was we will send you members and you let us select a pastor. We just want to help you.

I started in October 2012. So I’ve been here for about two and a half years.”

Chelsen: “How many members do you have now?”

Kell: 160-170 members and on Sunday, attendance averages between 200-220. The Lord has been very gracious. It’s been fun to watch. It’s amazing to start preaching the gospel and you see people come to the Lord. We are all still broken and messed up and need a lot of help from the Lord obviously, but God has been very gracious to us and we are very thankful.

Chelsen: “Young professionals is what most pastors in the D.C. area tell me their church body is comprised. Hearing you say you would like to engage more “gray hairs” seems like the opposite dilemma pastors outside of D.C. face. In your opinion, what is challenging about disciplining a young area, as well as encouraging?”

Kell: “Well, in regards to the rest of the country I do think we see an increasing number of young people. I know there’s a lot of articles about not as many young people in the church. In one sense that’s true and that maybe because— and I’m not saying this is a definite reason—but there seemed to be a lower bar of how we determined who was a part of the church and it was based on a lot more cultural Christianity. So I think nowadays, particularly up here, it costs something to be a Christian. Nominal Christianity is not advantageous these days. In a way, I think God is purifying his Church in a way that is really helpful and may reflect the numbers change.

Here in Washington D.C., what a wonderful opportunity. Hard and wonderful. Hard because it’s transient. I also think that in a place like D.C. people are longing for life to mean something. They’ve come here to ‘change the world.’ For those who try that and get eaten up by the machine, they are just broken, and they come to the ends of themselves and need help or those who are even successful, to see the futility, and seeing that there is an eternally glorious and meaningful call that Christ gives to his Church that will never die. The gates of Hell will not prevail.

Here in D.C., you get people who come and have desires to change the world. If they’ve got the Holy Spirit, then the Spirit can use those ambitions in really good ways. That is one thing I’m really encouraged by. We have a lot of members who love the Lord and they want to be used by Him. So they see themselves as evangelists in their workplace, their neighborhoods and want to help each other fight sin. That’s very exciting and encouraging to watch.”

Chelsen: “We saw many of those young people, like myself actually, during this year’s March for Life who came to the nation’s capital to try and make a difference for the voiceless. We see the brokenness that abortion causes and we want to do something about it, yet we feel discouraged or even get our priorities mix up at times. What advice would can you offer Christian advocates?”

Kell: “First, I’d just say praise God for men and women who want to change the world and are risking a lot to make that happen, like the March for Life and every other event that goes on every day that we don’t see. It’s commendable work and I’m thankful for it.

I do think it’s short-sided and dangerous of us to forget that unless the Lord builds the house, the laborers labor in vain. God is the one who ultimately changes hearts. As Jesus said in John 15:5, ‘I am the vine, you the branches. Someone who remains in me and I in him, he bears much fruit. But apart from me you can do nothing.’ True lasting change only comes by the hand of God. What we are going after is we want to see hearts ultimately changed.

Before I was a Christian, I was in a relationship, got a girl pregnant and we decided to kill our baby. And I know that the only thing that changes a heart is the gospel. It is the good news of Christ. It is God intervening.

Every great revival that has ever happened, whether it be in the heart of a sinner like me, or in entire areas filled with sinners, it begins with prayer. It begins with God’s people on their face, on their knees humbling themselves. Crying out saying, ‘God, we are willing to be used but we know that unless you do it nothing happens. So God would you please, for the glory of your name and good of your people, would you move here.’

Before we take a stand, we must begin on our knees. Even as we march, we walk in a spirit of prayer crying out for God to move, to intervene. Because unless He shows up, nothing happens. At least not lasting change. God is the only one who can alter the course of history and the heart.”