Does Gay UMC Group Want to “Burn the Damned Church Down”?

Will the national leadership of the Reconciling Ministry Network (RMN), the main unofficial United Methodist caucus seeking church acceptance of homosexual practice along with extra-marital sex more generally, even repudiate one of their own prominent regional leaders who recently expressed her support for the idea that the United Methodist Church is “damned” and should be “burned down”?

What am I talking about?

Given her own outspoken liberalism on homosexuality, many lefty United Methodists were hoping that Bishop Peggy Johnson of Eastern Pennsylvania would simply break the vows she made to God and the church to enforce our church’s policies, including those upholding biblical standards for sexual self-control. Liberal United Methodists even cheered a petition from some non-Methodist group gathering signatures of people who were largely non-Methodist (and not even necessarily Christian), without necessarily any appreciation for the church and its theology whatsoever, and telling her to disregard the UMC’s doctrine and standards.

Yet on social media, there was profound disappointment when she (finally) put her clergy publicly on notice that, from this point forward, they will face consequences if they performed a same-sex union service in violation of our rules. This was actually one of the strongest such public warnings I have seen from any United Methodist bishop recently.

When the RMN announced this on Facebook on Friday, October 3, the very first comment, from Joshua Allen, says: “A bishop’s role is to uphold discrimination against God’s beloved? Then burn the damned church down…because that’s what it is–damned.” 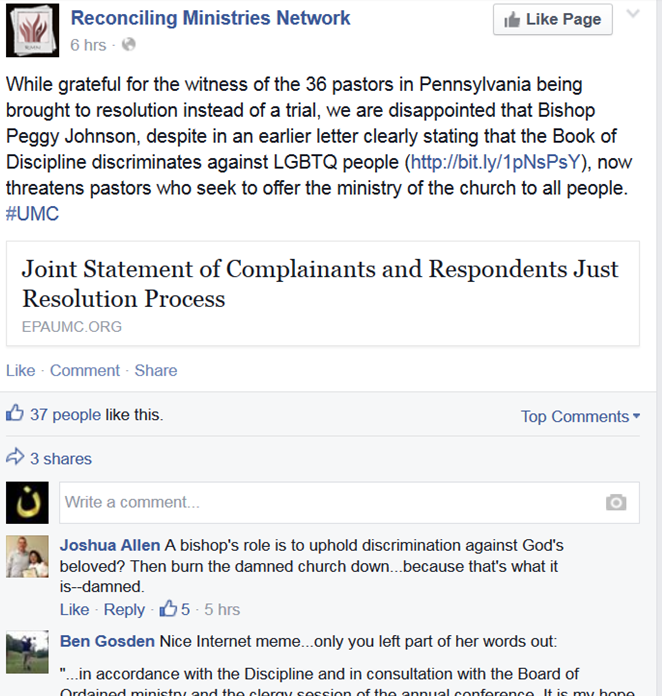 I can hardly imagine the blowback IRD/UMAction would receive if we would ever used such extreme and violent language against the church!

To be sure, it is not fair to hold an organization responsible for the words or behavior of any random individual who happens to be sympathetic or loosely associated with it.

But what about people who are specifically selected to be the group’s representatives and leaders?

One such individual is Sara Thompson Tweedy. She is now chair of arguably the most militant and active regional RMN chapter, on whose leadership team she has already served for a while. We have reported earlier on how this ordained United Methodist minister and activist for the LGBTQ cause recently turned out to be homosexually active herself, and how a complaint against her was unfairly dismissed.

As the screen capture shows below, this RMN leader was among the first to indicate her supportive endorsement by “liking” this comment: 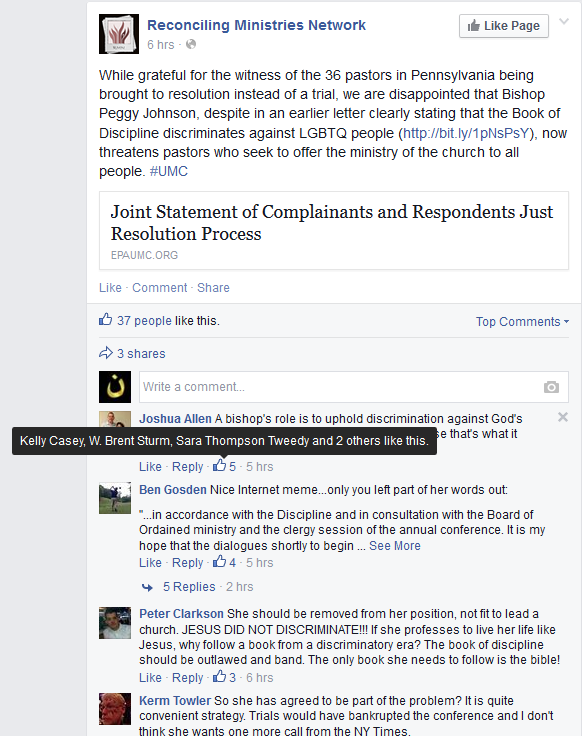 I realize all this took was a quick click of a mouse. But what sort of person, even for a moment, believes that it is appropriate behavior, in a public forum, for someone prominently identified as a minister of the Gospel of Jesus Christ to express support for denouncing the United Methodist Church as “damned” and even metaphorically (or literally?) calling for someone to “burn the damned church down”?

Nor is this just an isolated incident.

The fact of the matter is that the entire theologically progressive movement within the United Methodist Church seems to be built around prideful rejection of personal accountability. Such a mindset could hardly be more antithetical to historic Methodist values.

Meanwhile, even many “moderately liberal” UMC officials have again and again demonstrated that when push comes to shove, they are reflexively unwilling to draw any firm, consequence-bearing lines in the sand of the most minimal expectations for appropriate behavior on the part of the progressive caucuses. The examples are legion, from Bishop Hee-Soo Jung deciding that former RMN employee James Preston’s violently shattering a communion chalice at the 2004 General Conference (and later bizarrely, blasphemously claiming that the one who inspired him to do so was God) was no barrier to promoting him to District Superintendent, to the Connectional Table leadership’s decision this year to reward the liberal caucus activists who obnoxiously disrupt their meetings (while effectively marginalizing evangelical caucus representatives who patiently play by the rules).

This has sadly but unsurprisingly led to such unrestrained shrillness in interpersonal interactions being common, rather than exceptional, for those lifted up as leaders of the any-means-necessary progressive United Methodist caucuses. And it is a basic matter of intellectual honesty and empirical facts to acknowledge that leaders of renewal caucuses, while we always have room for improvement, simply do not engage in the sort of over-the-top interpersonal belligerence recounted in this article.

And where are there any liberal United Methodist caucus leaders that clearly, publicly draw the line against even some of the most extreme words and actions of their allies within the church? There are none that I can recall.

The antics of Amy DeLong and her “Love Prevails” group, which even some folk who are hardly fans of IRD have labeled “Love Bullies,” are too well-known for me to need to say much about them here.

But extreme shrillness by liberal United Methodist leaders even in casual interactions is hardly limited to that one group.

At the 2012 General Conference, while one female renewal group leader was quietly handing out literature to delegates, she found herself accosted by a belligerent, bearded (male) Common Witness Coalition activist who angrily verbally harassed her and accused her about her support for Christian sexual ethics. The man acting in such an abusive and physically intimidating way was not simply an unrepresentative activist over whose behavior the liberal coalition had no control, but Richard Bentley, an ordained minister and (at the time) a staffer for the Methodist Federation for Social Action (MFSA), the other main liberal United Methodist caucus group.

At the last couple of General Conferences, I have seen other progressive United Methodist leaders hold signs denouncing orthodox United Methodists as the equivalent of the Ku Klux Klan and as “Fundasexuals.”

In 2012, Jim Winkler was still CEO of the denomination’s lobby office, the General Board of Church and Society (GBCS), which he chose to run as an extremely liberal caucus group openly disdainful of moderate, conservative, and African United Methodists and openly opposed to official United Methodist positions the agency was charged with promoting. At that year’s General Conference, there was a moment near the end in which it became clear that a committee-endorsed motion to end our denomination’s scandalous affiliation with the Religious Coalition for Reproductive Choice (which uses our church’s name to oppose any legal restriction or even moral opposition to abortion) would die, not through honest and open debate on its merits but rather by time running out. Winkler’s response was, rather pointedly, to turn to an absolutely crestfallen and heartbroken member of our Renewal and Reform Coalition team to laugh mockingly and triumphantly.

If a similarly prominent leader of a renewal caucus had ever engaged in the same sort of loveless, cruel, kick-them-while-they’re-down behavior towards liberal observers at the very moment they were weeping in anguish over “losing” another homosexuality vote, this would be (rightly) decried by United Methodist leaders from across the theological spectrum.

Since at least 2012, I have observed progressive United Methodists (with the commendable exception of Candler Seminary’s dean, Jan Love) falling over themselves to demonize the Rev. Dr. H. Eddie Fox and dismiss all the great work he has done to spread to Gospel as evangelism leader for the World Methodist Council, simply because he is guilty of the apparently unforgivable sin of supporting historic, biblical Christian standards on sexual morality.

During the 2012 General Conference, another GBCS staffer, Katey Zeh, found time amidst her tweets promoting church support for elective abortion and homosexual practice to re-send a tweet from a fake account named “Lord Voldemort” that “confessed” to having “been inappropriately touching @fakeeddiefox.”

I am all for humor, within some basic boundaries. But who would think that exemplary behavior for a staffer of a Christian denominational agency ever includes publicly joking about sexual abuse of someone she sees as an ideological enemy?

Again, it’s not a merely rhetorical question, but there is an answer: Jim Winkler, who hired most of the folk who are still on GBCS staff, apparently thought this was the best person to lead the lobby’s efforts being done in the name of “Healthy Families.” Not sure how that theme fits with defending parental violence against very young children or laughing about the hilarity of people getting molested.

One of the most notable incidents was at the 2008 General Conference. Someone who at the very least rather resembles a rather prominent activist and leader in the “reconciling” movement was rather unhappy with the positions IRD was peacefully advocating there. So much so that this individual lost control, furiously yelling “You’re EVIL!” and wildly arm-clawing at one of my fellow staffers, only being held back by a nearby friend.

Through all of these extreme words and actions run several consistent themes among progressive caucus leaders, as far as I can observe: No one is willing to take responsibility or make an effort to keep their own faction/house in order. There is no evidence that repentance is even on their radar screen. And definitely no interest in basic Golden-Rule civility towards, let alone “reconciling” with, Christians who do not share their progressive values.

If other RMN leaders would like to demonstrate that this is not a fair picture, they can start by clarifying whether or not they agree with the “fiery” Allen-Tweedy attitude towards the United Methodist Church.

31 Responses to Does Gay UMC Group Want to “Burn the Damned Church Down”?