United Methodists gather this coming week for Jurisdictional (regional) Conferences and the election of new bishops to fill 15 open positions. Among the 54 candidates are three openly partnered gay and lesbian nominees. An examination of statistics from churches pastored by Frank Wulf, Karen Oliveto and David Meredith reveal widely varying congregational vitality and size.

While the denomination’s governing Book of Discipline expressly prohibits the ordination of any “self-avowed, practicing homosexual”, this is not the first time that openly LGBT candidates have stood for election. In the United Methodist Church, any clergy in “full connection” can be nominated for the episcopacy, and candidates can nominate themselves. Successful candidates typically obtain the endorsement of their annual conference (local body) and/or caucus groups. Some gay clergy serve in the denomination’s more liberal regions on the technicality that they have not “self-avowed” their identity as openly practicing non-celibate homosexuals.

One of the candidates, Wulf, was previously nominated in 2008 in the denomination’s liberal and declining Western Jurisdiction. Wulf, who until this month pastored United University Church (a joint United Methodist/Presbyterian Church USA congregation) in Los Angeles, came in 6th place out of 19 candidates in the 2008 ballots, which that year elected candidates to two open spots in the Western Jurisdiction. Wulf describes himself as in a “long-term covenanted relationship.”

Wulf has served at United University Church since 2005, and the congregation remains tiny at 44 members according to the most recent publicly available data. In 2013, the congregation reported a single baptism. The Lost Angeles pastor has obtained the endorsement of the California-Pacific Annual Conference, which encompasses southern California, Hawaii and several Pacific islands. 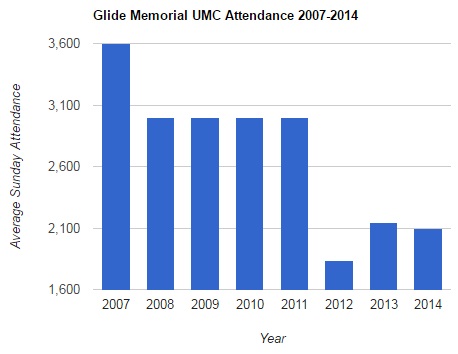 Glide is a famously progressive congregation that hosts a wide number of social ministries. In 2015, the congregation self-reported membership of 12,833 persons, a number that has steadily grown since 2008. In contrast, Glide reported an unchanged average Sunday attendance of exactly 3,000 persons from 2008-2011. In 2012, attendance was sharply revised downward 39 percent to 1,832 persons, and slightly rebounded to exactly 2,100 in 2014. Baptisms have ranged from 25 in 2007 to only 6 in 2012. The San Francisco church is, year-after-year, claiming increased membership while attendance shrinks and baptisms remain a small source of new members for a reportedly large congregation. 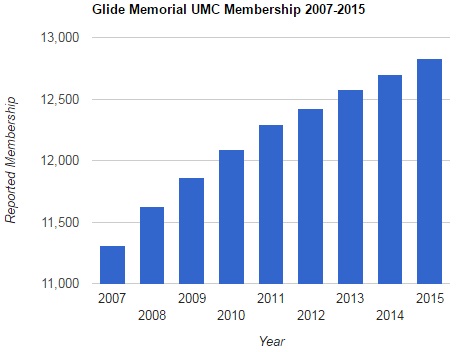 In the North Central Jurisdiction, Meredith has been nominated but has not received the endorsement of his West Ohio Annual Conference. Meredith appeared in headlines earlier this spring as he married his partner at a Cincinnati-area United Methodist Church, in violation of the church’s discipline. Seventeen candidates are vying for four open spots in the North-Central Jurisdiction, which encompasses the Midwest.

If Wulf, Oliveto or Meredith is elected next week, they will be the first openly gay clergy elected to an episcopal position within the United Methodist Church (Oliveto and Meredith recently came out as openly partnered). The denomination’s high court, known as the Judicial Council, would most likely hear a challenge to their election on the basis that their “self-avowed” status conflicts with the denomination’s existing discipline, which has remained unchanged since 1972. The nine-member council, which seated five new members at the conclusion of the recent United Methodist General Conference in Portland, has seven members which were endorsed by traditionalist renewal groups at the time of their election.

Update: Both Meredith and Oliveto tout their progressive credentials in profiles made available to Jurisdictional Conference Delegates. Meredith noted longstanding ties with the liberal United Methodist caucuses Methodist Federation for Social Action and the Reconciling Ministries Network dating back to 1984, along with the transgender caucus Affirmation. Meredith also served with Planned Parenthood of Butler County, Cincinnati, and Southwest Ohio/Northern Kentucky for 11 years. According to Oliveto’s profile, the pastor served as a Board Member of Reconciling Ministries Network 1992-1999 and 2005-2011, serving as chair from 95-99. Oliveto also served on the Clergy Advisory Board of the Delaware-Otsego (NY) Planned Parenthood from 1983-1986 and chose to highlight a time when her previous San Francisco church, Bethany UMC, became an illegal medical marijuana dispensary.