The United Methodist Church’s liberal and rapidly declining New York Annual Conference (NYAC) made news this week when the conference’s clergy session voted to approve four non-celibate LGBTQ candidates for ordained ministry. Three of the candidates are seeking commissioning as provisional deacons; the fourth is seeking ordination as a pastor in a part of the church that has seen more than one-in-five attendees vanish in the span of only eight years.

All four of the candidates are signers of an open letter in which a group of clergy and candidates for ordination came out as “self-avowed practicing homosexuals.”

The decision by conference clergy to proceed with approving the candidates is in direct contradiction with the denomination’s Book of Discipline which candidates for ordination must vow to uphold. The discipline states that “The practice of homosexuality is incompatible with Christian teaching. Therefore self-avowed practicing homosexuals are not to be certified as candidates, ordained as ministers, or appointed to serve in The United Methodist Church.”

LGBTQ activists within the United Methodist Church have repeatedly insisted that changing the denomination’s discipline concerning human sexuality is necessary in order for the church to grow. However, the New York Annual Conference is one of the fastest-declining regions in the global denomination. 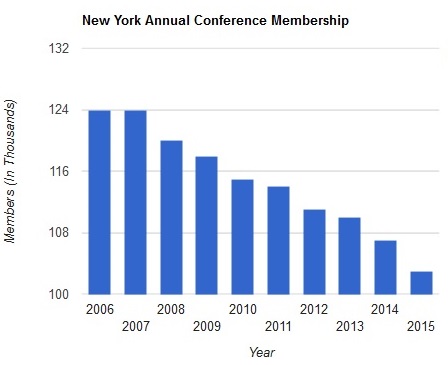 The United Methodist Church loses approximately 100,000 members each year in the United States, but is growing globally, especially in Africa, where it adds approximately 200,000 members each year. Of the 12.4 million United Methodists globally, 7.2 million are in U.S. jurisdictions. But while the denomination grows worldwide, the rate of decline in the NYAC is comparable to that of the Episcopal Church and Presbyterian Church (USA), both of which hemorrhaged members and witnessed sharp declines in attendance, baptisms and marriages following votes to redefine marriage or no longer require clerical vows of celibacy in the single life or fidelity in marriage. 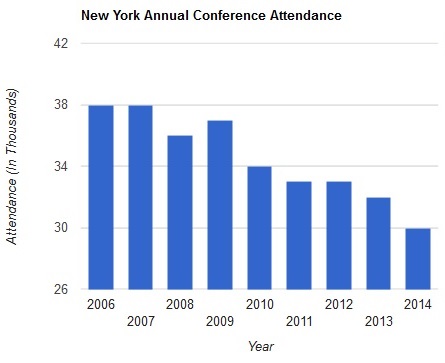 Earlier this year, the local body in New York charged with certifying candidates, known as the Board of Ordained Ministry (BoOM), announced that it would no longer consider sexual practices among its evaluation criteria. New York is one of four conference BoOMs (including Baltimore-Washington, Pacific Northwest and Northern Illinois) to make such an announcement, however New York is the first to move ahead with approving openly LGBTQ candidates. Earlier this spring the Baltimore-Washington Annual Conference BoOM certified a married lesbian woman as a candidate for the provisional deaconate, but she did not obtain the necessary two-thirds vote of conference clergy in order to proceed with commissioning.

Recovery of the Pastoral Call