The swiftly declining Episcopal Diocese of Michigan has apparently discovered a new way to lose members: send them to the Islamic center.

The diocese (which has lost nearly a third of its membership over the past decade) is promoting on Facebook an “opportunity to learn more about Islam in the Lansing area”.

Michigan Episcopalians have participated in a series of interfaith gatherings at local temples, mosques and churches, but the “Islam 101” session at the Lansing Islamic Center is not an interfaith panel. “Islam 101” offers answers to: “What is Jihad?” “What do Muslims believe about Jesus?” and an opportunity to learn about “The Quran — God’s message?”

The event, shared locally by All Saints Episcopal Church-East Lansing (which lost half of its membership in the past decade) takes place monthly. The Episcopal Diocese of Michigan is the largest of the state’s four dioceses and encompasses the Detroit area and Southeastern Michigan.

Readers of this blog will recall how the Episcopal Church famously sold a church building to a Binghamton, New York Islamic Center for a third of its value rather than sell it to departing Anglicans. The denomination’s Washington National Cathedral also hosted Islamic Friday prayers in 2014. IRD’s Faith McDonnell wrote to Global South Anglicans about the developments. 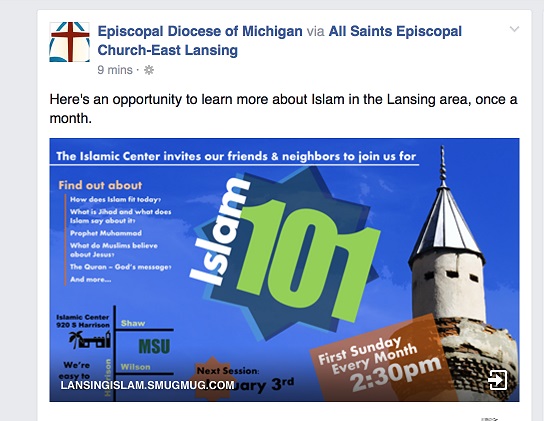