The Myth of American Decline

Franklin Graham, a Christian commentator and son of the famed Billy Graham, recently declared in a video that “our country is beginning to implode. We are on the precipice of anarchy.” There’s a reason why this message and Donald Trump’s campaign slogan, “Make America great again,” have resonated with so many Americans, especially self-described Evangelicals. An overwhelming majority of white Evangelical Protestants have bought into the myth of American decline, believing that the United States has entered into desperate cultural and economic degeneration. Evidence shows that reality is much more complex and far less dreary, however.

Seventy percent of white Evangelicals say America had changed for the worse since the 1950s, and the majority of white mainline Protestants and Catholics tend to agree. White Evangelicals bought into this narrative more than any other group surveyed by the Public Religion Research Institute (PRRI) and the Brookings Institution, according to data published in June. 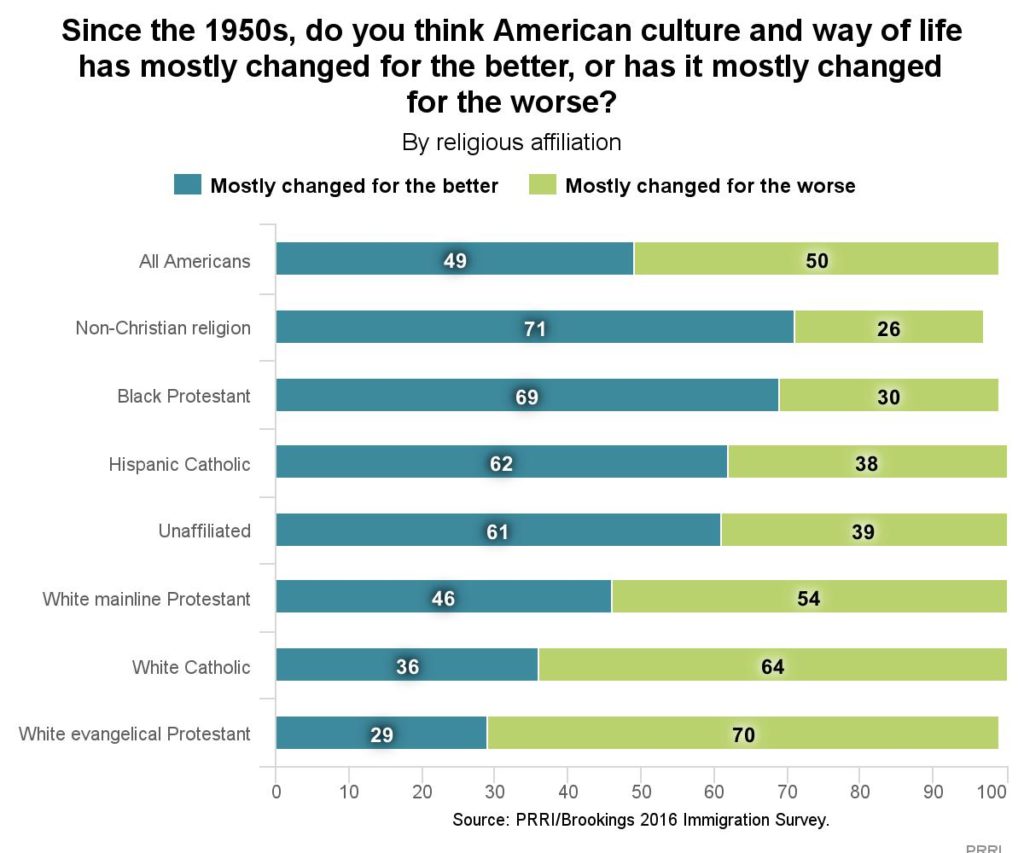 But is this perception accurate? There’s plenty to suggest otherwise; that the myth of American decline is actually a false narrative.

First, religion – Christianity in particular – still plays a meaningful part in the vast majority of Americans’ lives. Three quarters of Americans (75 percent) describe themselves as Christian, research company Gallup found in December 2015. This fits comfortably within the context of historical trends.

Mark Tooley, president of Institute on Religion and Democracy, noted as much in October 2013. He said that contrary to popular perception, “church participation has remained remarkably unchanged nationally for most of 80 years.” He highlighted even conservatives have “declared America post-Christian,” despite the fact that “75-80 percent of Americans say they are Christian.”

“So America often feels more secular even if Americans are not,” Tooley wrote. “But all of us, however unknowingly, still swim in the cultural and moral waters warmed by Christendom.”

Furthermore, religion in general remains “very” or “somewhat” important to 77 percent of Americans, according to an extensive survey conducted by Pew Research Center in 2014.

Even though the overall number of religiously affiliated Americans may be drifting downward, Pew found that an increasing number of Americans from across the board said they consistently felt a sense of spiritual “well-being” and “wonder about the universe.”

What’s also impressive is that religious Americans are becoming more committed to their faith. Pew found that people of faith are increasingly likely to read the scriptures, pray or study scriptures with fellow believers, and evangelize.

So the data clearly indicate that America remains an overwhelmingly Christian country, and in some ways is becoming more spiritual.

Analysts like Pew’s Drew DeSilver assert that real wages have actually stagnated since 1964. Of course, most workers also receive non-monetary benefits. Total employee compensation takes this into account. This statistic includes “employer contributions to pension funds, to health insurance, and to social insurance programs,” as measured by the Bureau of Economic Analysis (BEA). Taking into account the impact of inflation on consumer prices, the average compensation for employees has nearly doubled since 1950, as calculated from data collected by BEA and BLS: 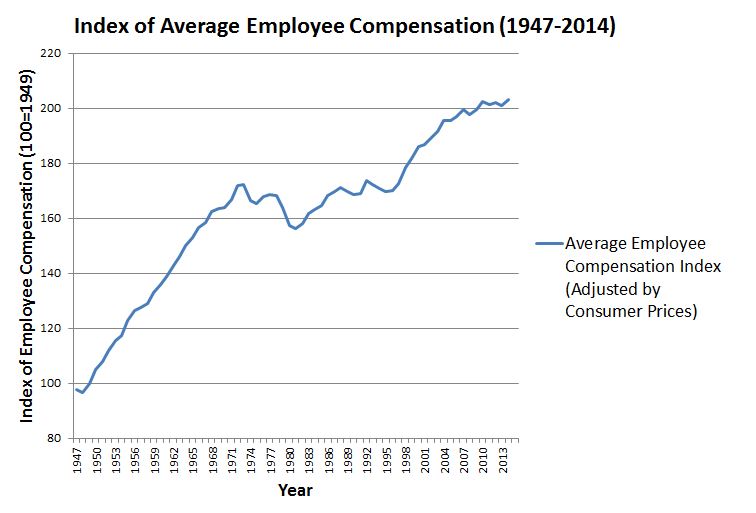 If Americans are honest, most admit that their lives are going pretty well. Seventy-nine percent of them said they were satisfied with their current standard of living in December 2015, according to a Gallup survey. Since Gallup starting keeping data on this topic in 2008, approximately 70-80 percent of Americans have generally expressed their satisfaction. If anything, responses have been slightly more positive in the last couple of years than ever before. 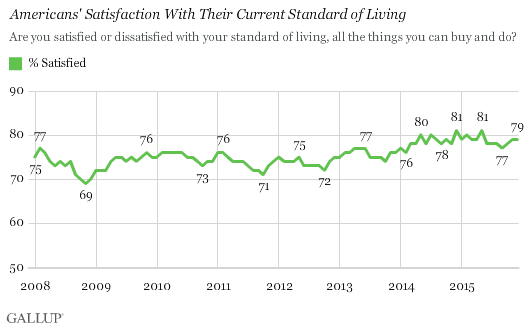 So is America really headed down the tubes? Apparently not.

Americans attitudes show they doubt the veracity of the myth of American decline on a personal level. They tend to agree they are spiritually and materially well-off. Moreover, the data backs up their claims. They are at least as committed to their faith as ever, at least in recent generations, and they are apparently wealthier than ever before.

This should cause my fellow white Evangelicals to reconsider their overwhelming pessimism about where our country is headed. Perhaps it’s time to give up the myth of American decline.

7 Responses to The Myth of American Decline