14 ARTICLES IN THIS TOPIC

Part One of this blog post explored how Christmas lights are assumed to be a more superficial and secular aspect of the Christmas season. But cheery, blazing, glorious lights cannot help but be a symbol of Jesus! As the first chapter of the Gospel of John declares:

The darkness has never yet, nor ever will, overcome the Light. But it sure does try.

The Christmas lights we see all around us may or may not have been intended to symbolize the Light of Christ. Even most of us who are not secular celebrants of the season don’t really consider them a significant spiritual symbol. We like the beauty and cheeriness of Christmas lights, or like my mother, encouraging my father to put some lights around, we think it is “everybody but us!” if we don’t festoon our verandas!

But who could have known that Christmas lights are a Really Big Deal to Sharia adherents? Such a big deal that there is an article on the very-Sharia-adherent “IslamWeb.Net” entitled “How to explain the Christmas lights to your kids.”

Here’s how the article begins (emphasis and comments added by me):

It is very important that we prepare ourselves for this imminent occasion. As always, at the end of each year, day in and day out and all through the night, we are constantly pummeled with the lights, decorations, and music of the season at every turn. (Gee, I wonder what he thinks the Muzzein sounds like to us infidels!?) You won’t be able to take a trip to the grocery (but you will be able to find halal foods in most American grocery stores!) the library, or even your front yard without noticing it.

The Islam Web cleric (since he is not identified, we will refer to him as Sharia Cleric from now on) goes on to present a terrifying scenario: you’re driving to the mosque past all the “lit up houses” and “little Omar” exclaims, “Look, the lights are so pretty!” And, of course, the normal response of the good adherent of the Sharia is to frown at the child and scold him, saying “No, no, no! Omar! Those are ugly!”

Poor conflicted child! How is he to know that liking pretty lights could lead to apostasy? The all-knowing Sharia Cleric continues:

It may even be hard for you to tell someone the lights are ugly — possibly because you don’t even believe that yourself. Why? Because the lights are delightful to most,  young and old alike, that’s why they are used for all sorts of festive occasions. The fact is, although they may be nice to look at, the underlying reason is that they are used at this time of year, and this is what is ugly. . . not the lights themselves.

Whatever can Sharia Cleric mean? Well, he continues to say that children only see the pretty lights. “They don’t see the Kufr (disbelief) that is being celebrated inside the lit-up houses. 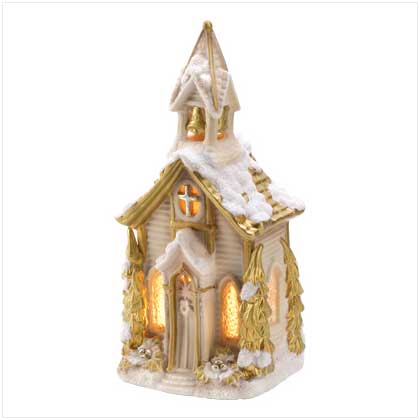 All churches should shine with the Light of Christ, like this little lamp. (Photo credit: reigninggifts.com)

It’s not the lights that are evil and ugly — it is what they symbolize going on inside those “lit-up houses”! (And some get more lit-up than others!) And so, says Sharia Cleric, this is a good time to sit your kids or a new Muslim down “and fully explain the major differences between Islam and Christianity.” (Huh! Kind of the opposite of what Religious Left leaders, Dr. Hawkins of hijab fame at Wheaton, Dr. Miroslav Volf of Yale, the Insider Movement, and some Christian missionaries attempt — showing how much we have in common!) Sharia Cleric continues:

One should emphasize on the Kufr that is behind all of it, and how non-Muslim parents lie to their children about the fictitious Santa character! One should explain that the time of the year Christmas falls in is an ancient pagan holiday and that adorning the evergreen trees with decorations is a practice of pagans, and that it’s even forbidden in the Bible! (Jeremiah 10: 3-4).

Boy! Talk about proof texting! The Bible passage cited by Sharia Cleric is, of course, referencing the practice of cutting down trees and carving them into idols. Most frequently, these would be idols for the pagan Canaanite goddess Asherah, who was always represented as a tree or a pole. Christmas trees are not forbidden by the Bible, unless you are going to fall down and worship your Christmas tree! So the parents should emphasize how non-Muslim parents lie by lying themselves: taqiyya.

Another point. It has been the practice of Christianity to redeem what is pagan in culture and infuse it with the light of Christ. The ancient Celtic saints like Patrick built churches on the sites of pagan temples and beat the Druids at the bonfire game. All that Satan has ever been able to do is to corrupt and imitate what God has done. Lucifer (whose name means “light bearer,” sadly and ironically) cannot create, he can only imitate. That kinda reminds me of another devilish guy who imitated things from other religions!

Sharia Cleric concludes by telling parents to remind Little Omar of the following verse in the Quran, “in which Allah Says: ‘And from those who say, We are Christians, We took their covenant: but they forgot a portion of that which they were reminded.'” (Quran 5: 14). Sharia Cleric omits the end of that verse, which continues “so we caused among them animosity and hatred until the Day of Resurrection. And Allah is going to inform them about they used to do.” Hopefully, when Little Omar sees the pretty lights, he will now understand that they symbolize the unbelievers such as those described in Quran 5: 14, who did not accept Islam, and upon whom the Quran now invokes Allah’s curse of animosity and hatred until the Day of Resurrection!

In addition to demonstrating how very seriously Sharia adherents take Christmas lights, and how they understand that there is an underlying meaning to a seemingly innocuous holiday tradition, it is good to keep in mind how Sharia Cleric began his tome — as a victim, who, both day and night, is “constantly pummeled” by Christmas lights. In many parts of the country we have lost public manger scenes, we have had Christmas trees transformed into “Holiday trees,” we have been forbidden the use of red and green in holiday decorations, and we have even seen Santa Claus rendered  persona non grata. All because of fear of hurting the feelings of some Christmas non-practitioner. Could Christmas lights be next? 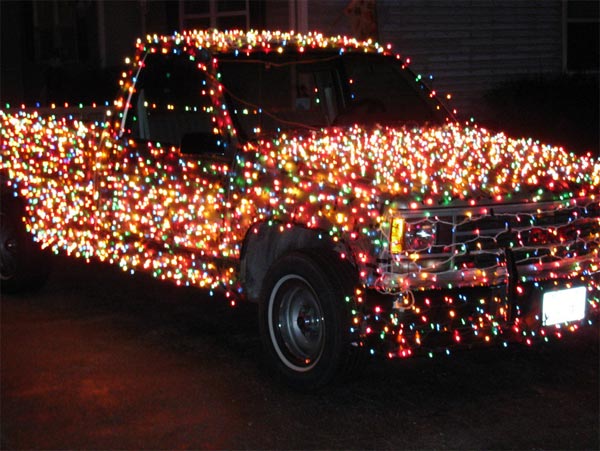 My advice? Let the Christmas lights shine! Anywhere and everywhere. Let them be glorious — dim, but still shining, reflections of God’s own glory of which the angels sang on the night that Christ was born. Add a manger scene or two, if you prefer obviousness to nuance. And, because the passage in the first chapter of John’s Gospel continues a bit further on, “We have seen his glory, the glory of the one and only Son, who came from the Father, full of grace and truth,” I have faith that some Little Omars riding past the Christmas lights will see His glory, and because of His grace, come to know the truth that lies beneath the dazzling display.

On the Historicity of the Flight to Egypt