14 ARTICLES IN THIS TOPIC

From the tasteful one-candle-in-each-window of a three-story colonial to the most garish and outrageous sacred/secular honky-tonk of a front-yard display — I have always loved Christmas lights. I appreciate the loving care with which homeowners create their winter wonderlands.

My house did not have outdoor lights every year when I was growing up. And when we did have them, it was usually just a few days before Christmas! My father was always too busy with The Salvation Army’s Christmas business from Thanksgiving all the way to Christmas Eve to string some lights above our front door.

“Everybody but us!” my mother would sigh each time we left our un-Christmassy naked house and drove through our illumined neighborhood at Christmas. Even today, my mother’s lament echoes in my head every December, inspiring me to display some sort of Christmas decoration on the patio of my condo. I dig my “JOY” sign out of the basement storage room and display it proudly every year.

Still, I have always considered Christmas lights to be “Christmas-lite.” They are the fun and festive part of Christmas, but not “Christian” per se. Do Christmas lights have much to do with the “Reason for the season?”

The exterior of my childhood home remained “dark” during the Christmas season (which I now know is actually the Advent Season, by the way). But inside the house we were celebrating the birth of Christ, the Son of God, Light from Light. . .

And there you are! In what a beautiful, wildly colorful, extravagant, joyful way Christmas lights can symbolize Jesus, the Light that came into the world (John 3:19). They can also remind us that Jesus called us to be “the light of the world” (Matthew 5:14). We are supposed to be light to others, to show them the way to Christ. 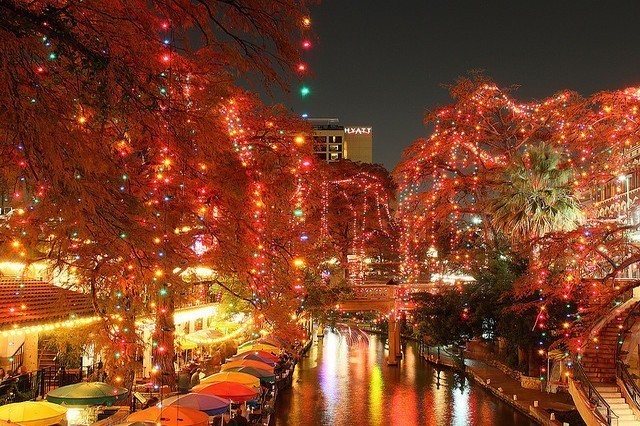 Now some will argue that Christmas lights — like most aspects of Christmas festivities — have pagan origins. That’s true. It is just one more  way in which the Church re-claims the fallen world for Christ. According to a December 5, 2014 article in Communities Digital News (CDN):

The History of Christmas says that the tradition of lighting the darkness goes back to the Yule, a midwinter festival celebrated by Norsemen. The festival boasted nights of feasting, drinking Yule, the Norse god Odin’s sacrificial beer and watching the fire leap around the Yule log burning in the home hearth.

The lighting of the Yule log spread throughout Europe. Many believed the log’s flame summoned the sun’s return and drove away evil spirits. Over time Christianity adopted this tradition and the light from the Yule log came to represent Jesus as Light in the darkness.

Who better to drive away “evil spirits” than Jesus?

CDN adds that in the days “before electricity lit up dark skies” people would put candles in their windows “to welcome weary travelers.” The candle light was “a beacon of hope,” explains the article, and for those travelling on “desolate and pitch-dark roads that tiny glow in the darkness meant sanctuary was just ahead.” Another website, What the Christmas Symbols Mean, says that lights “signify hope, happiness, and safety.”

Maybe it is harder to conceive of something having spiritual symbolism when it plugs into an electric socket — whether it’s incandescent or LED! But whether or not those who put up Christmas lights intend it, their dazzling display is a symbol of the hope, the happiness, and the safety of the one true Light who is the Christ of Christmas.

And if I didn’t already believe it because of what I said above, I read something last week that has thoroughly convinced me  — something that has made me determined to have Christmas lights blazing from my house every year! I will tell you about it in Part Two of this blog post.

On the Historicity of the Flight to Egypt