Every year, the IRD sends a contingency to the Wild Goose Festival, an annual music festival and get-together of progressive and liberal Christians that meets in North Carolina. Last year, Jeff Walton noted the beginning of a trend in an article titled “Wild Goose Goes Gay- and a Whole Lot More“. With sponsorship from the gay advocacy group Human Rights Campaign and events trumpeting intersex and transgender issues, the festival made a sudden turn towards full-throated endorsement of the gay rights movement.

Keep in mind, while Wild Goose has always been marketed toward liberal people of faith, it was only three years ago that Wild Goose held a debate between the Tony Campolo and his wife Peggy, during which Tony defended the biblical prohibitions against homosexuality. The same festival had a performance by Michelle Shocked, a Christian folk singer vocally against homosexuality. “You are looking at the world’s greatest homophobe,” she told the crowd when questioned on her stance. In its first year, there seemed to be an understanding that even among liberal Christians there was room for disagreement when it came to homosexuality.

After attending this year, I can confirm that the pro-gay trend has continued unabated. There were so many events trumpeting the acceptance of homosexuality, it was literally impossible to attend every one. The lectures on “How the Queers Saved My Soul” and “Queer People Changing Church” were held at the same time, for example. The film Seventh-Gay Adventists was screened at the same time as a service held by a gay Jewish rabbi, founder of the Rainbow Center and co-editor of “Torah Queeries.” Seventh-Gay Adventists was also screened at the same time as a Wild Goose first: a drag show.

“A Gender Bending Gospel Celebration for The New Thought Generation“

There was not any overt transgender presence at the Festival this year comparable to last year’s workshops on “Trans Theology” and “When Male and Female Aren’t Enough.” But the Festival took another turn for the bizarre when Rev. Yolanda entertained Wild Goose attendees with gospel favorites and original songs in “Rev. Yolanda’s Old Time Gospel Hour.” When not performing as Yolanda, Rev. Roger Anthony Yolanda Mapes is also an “Interfaith minister” along with his/her husband Rev. Glen Ganaway.

(Disclaimer: While I know some drag queens prefer just male or female pronouns, Yolanda’s website uses “he/she.” To those who are sensitive about such things, when I say “him/her” and “he/she,” I don’t mean to mock him/her.)

The show was interspersed with recollections of his/her unconventional life. After growing up in Alabama, Yolanda (then-Roger) joined a commune, which he/she was kicked out of after falling in love with a man. After a brief stint in college and then another commune, he/she then moved to New York City where he/she met his/her husband in the Radical Faeries, a gay pagan group. They got married and both became Interfaith ministers.

In spite of all my conservative curmudgeonliness, I actually enjoyed much of Rev. Yolanda’s Old Time Gospel Hour. What can I say? He/she was a very talented singer. There were classic songs such as “I’ll Fly Away,” and a few original arrangements that varied from the spiritual (“Love Divine”) to the bizarre (“Alien Love Child,” during which Rev. Yolanda declared he/she was the “alien love child of Dolly Parton and John Waters”). The only time I was legitimately irritated was during the closing performance of “How Great Thou Art,” possibly my favorite hymn. Halfway through, he/she changed the lyrics: ”I walk this path in six-inch heels and platforms, /And then sometimes, in manly rugged boots.”

Needless to say, the performance lacked any explicitly Christian elements aside from the hymns. But then, as Denny Burk pointed out recently, even Wild Goose’s website appears to be taking pains to remove any references to Christianity.

Fathers of the Groom

Similar to 2011’s debate between the Campolos, Wild Goose 2014 also had a conversation about homosexuality on the main stage between defrocked-then-refrocked UMC pastor Franklyn Schaefer (as he is now styling himself to avoid confusion with the other Frank Schaeffer) and Brian McLaren. Only their conversation wasn’t a debate. Instead, it was essentially a mutual admiration society, where the two clergymen congratulated each other for having presided over their son’s gay weddings despite opposition in their church and faith traditions.

As Jonathan Fuller reported earlier this week, the two also had something else in common. McLaren mentioned that the previous Tuesday, he had been invited to the White House to discuss global LGBTQ rights as a representative of the faith community. Schaefer also had been invited to the White House the following week for an LGBTQ event. “One of my dreams is to shake President Obama’s hand,” Schaefer said, “Maybe that will happen. I hope so!”

Immediately after his discussion with McLaren, Schaefer walked over to the gallery tent to tell his story again to yet another captivated audience. That was followed with a book signing of Schaefer’s upcoming book “Defrocked.” (Not to be outdone, Brian McLaren had two book signings over the weekend.)

Despite all the talks and panels and booths and shows and movies promoting acceptance of homosexuality, there were two moments that I thought perfectly encapsulated the Wild Goose ethos when it came to sexuality. The first was during a workshop entitled “Mindful Sexuality.” The woman running the workshop asked us all to stand up and line up on a continuum. On the right were people who used “Biblical teachings” as guidelines for their sexual behavior, in the middle were those who used “Jesus teachings” (…which aren’t Biblical teachings?) and to the left were those who “never really use the Bible at all for my lifestyle guidelines.”

Needless to say, the three dozen or so participants ended up a giant clump to the center-left. I was alone with an older gentleman on the right. As we were sitting down, he remarked, “The question is, does the Bible really say what they say it does?”

The other enlightening moment occurred the very second I stepped onto the Wild Goose campground. At the entrance to the Wild Goose was a large painted sign containing the words to the poem “Wild Geese” by Mary Oliver. So how did this poem– which organizers thought should be the first thing festival-goers saw– begin?

You do not have to be GOOD.
You do not have to walk on your knees
For a hundred miles through the desert, repenting. You only have to let the soft animal of your body
love what it loves… [emphasis in the original] 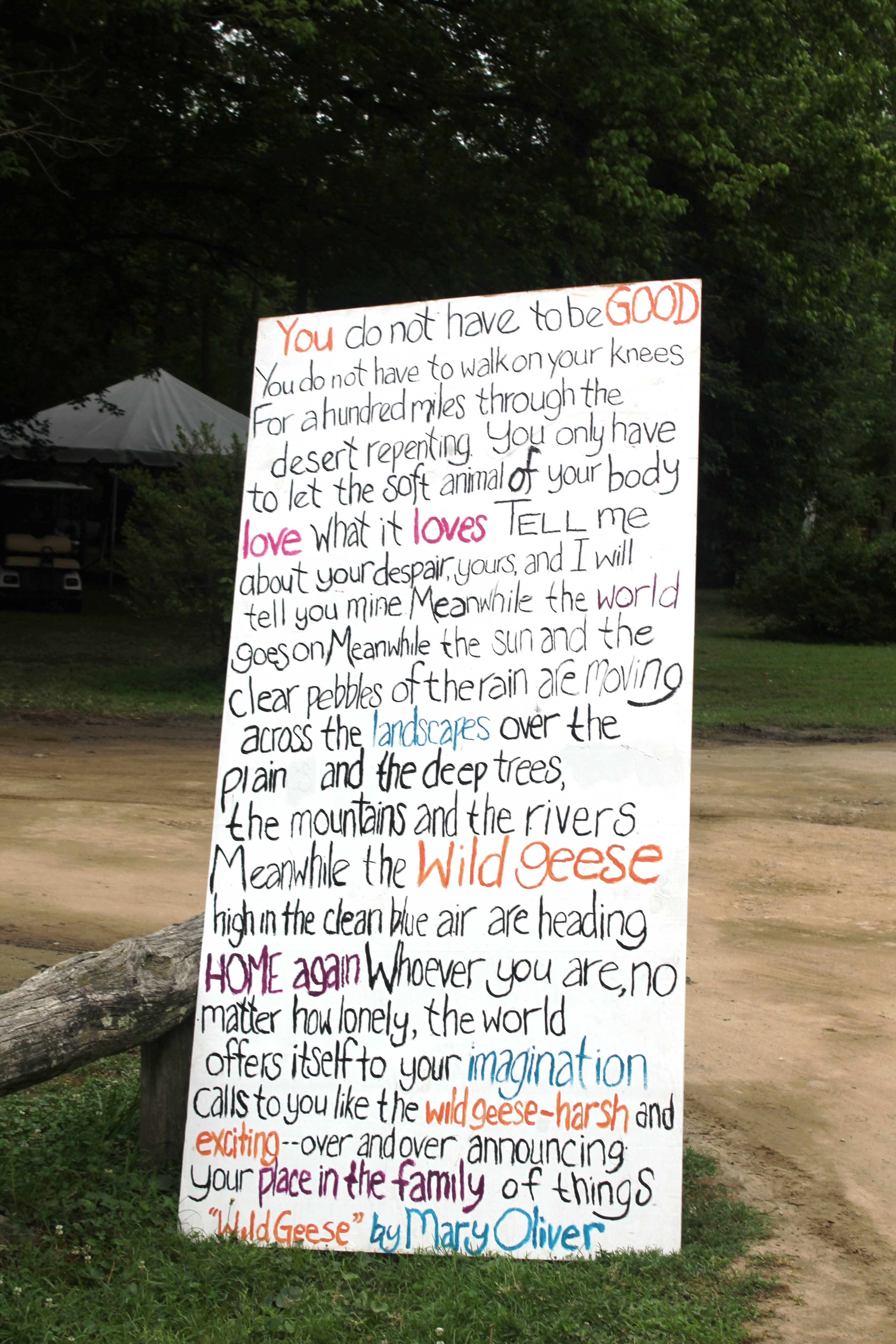 Who would of thought that in a festival with a drag show, a “Christian atheist,” a race rant, and a bizarre carnival, the most blatant anti-Christian sentiment would be plastered across the entrance?

Current Religious Freedom Battles and a View to the Future